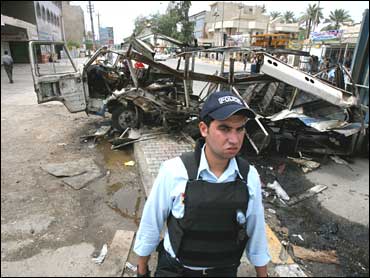 Six bombs exploded in predominantly Shiite sections of the capital Sunday, killing at least 45 people in a renewal of sectarian carnage that set back the U.S. push to pacify Baghdad.

And in the holy Shiite city of Karbala, health officials raised the toll from a bombing Saturday close to one of the sect's most sacred shrines, saying 47 people were killed and 224 wounded.

The military also reported the deaths of two U.S. soldiers and a Marine, killed in separate incidents in Iraq. One soldier was killed by small arms fire Sunday while trying to reach an Iraqi police unit under attack near a mosque in southern Baghdad. One civilian was wounded in the incident.

Another soldier died Saturday when a roadside bomb exploded while the unit was on a foot patrol south of Baghdad. A Marine died the same day in combat in Anbar province, the military said. The victims' names were withheld pending family notification.

Twin car bombs exploded minutes apart in the busy market of Baghdad's Shurta Rabia neighborhood, a mostly Shiite area in the city's west. The first blast went off at midmorning in front of a kebab restaurant. Five minutes later, another car exploded nearby as rescuers were evacuating victims. Many women and children were among the casualties, police said.

Shortly after noon, a suicide bomber blew himself up on a minibus near a courthouse in the mainly Shiite northwest Baghdad neighborhood of al-Utafiyah, killing at least eight people and wounding 11, officials said.

Many of the victims were severely burned, an official at the Khazimiyah Hospital said.

About three hours later, a minibus rigged with explosives detonated on a busy street of electronics shops in the predominantly Shiite central Karradah district, killing 11 people and wounding 15, authorities said.

The owner of a glass shop said he saw a suspect park the bus at the roadside and leave.

"It was an ordinary thing because usually bus drivers stop there waiting for passengers, so we didn't suspect anything," said the witness, who gave only his nickname, Abu Jassim.

"Five minutes later, the bus blew up — damaging the surrounded area and burning more than eight civilian cars that were passing by," he said.

In the same district after nightfall, two roadside bombs exploded within five minutes of each other, killing at least eight civilians and wounding 23, police said.

Six shops and several cars parked nearby were damaged by the blasts, which occurred about 20 yards apart, police said.

The two British helicopters crashed after an apparent collision 12 miles north of Baghdad, killing two British personnel. Four other personnel were injured in the crash, one very seriously.

"Sadly, two personnel have died and one is very seriously injured. All of these were UK personnel. My thoughts and sympathy are with them and their families," Browne said, adding that the next of kin had been informed.

British forces, headquarters in the southern city of Basra, rarely fly missions north of Baghdad, where the helicopters crashed.

"I can't talk about the particular mission they were involved in, but we do have units operating as part of the coalition across Iraq," a British defense ministry official said on condition of anonymity, in line with government policy.

Meanwhile, dozens of Iraqi policemen demonstrated in front of their Baghdad station Sunday, accusing U.S. forces of treating them like "animals" and "slaves."

The protest took place at Rashad station in Baghdad's eastern neighborhood of Mashtal.

Officers chanted "No, no to America! Get out occupiers!" while U.S. troops in two humvees and a Bradley fighting vehicle watched from a distance.