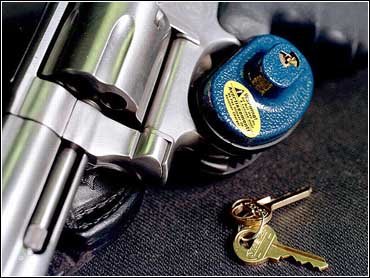 Some 400,000 gun locks were recalled Wednesday after testing showed they could be opened without keys — in some cases with just a sharp tap on a table.

"These gun locks do not do what they are intended to do, which is to serve as a deterrent to keep a child out of a gun," said Russ Rader, a spokesman for the U.S. Consumer Product Safety Commission, which announced the recall jointly with the National Shooting Sports Foundation (NSSF), a gun-makers trade group.

All of the locks being recalled were made by the NSSF's supplier, Adstar Inc., of Merrick, New York.

Recent tests of 32 models of gun locks, meant to be placed on gun triggers, found that all but two could be opened without a key, the commission said.

"In some cases, with the recalled gun lock, you could simply whack the gun on the side of a table and it would open," Rader said in a telephone interview.

With some other gun locks, he said, "You could open them with a paper clip."

Commission officials noted that while toys sold in the United States are subject to 12 safety standards, there are none for gun locks.

"We want to work with the industry to voluntarily come forward with a standard," Rader said. "If they do not, we would consider a federal safety standard. If Congress takes separate action to require a safety standard, we would certainly welcome that."

The NSSF is working on a set of standards, and Rep. Eliot Engel, a New York Democrat, has introduced legislation calling on the consumer commission to set a standard for child safety devices on firearms.

"When parents put gun locks on their firearms, they should have confidence that those locks will prevent their children from discharging that firearm," Engel said in a statement. "For obvious reasons, a faulty gun lock is a deadly serious problem."

Engel introduced legislation instructing the CPSC to set a quality standard for all child safety devices used on firearms. "It only makes sense that all gun locks should meet a real safety standard," Engel said. "This bill will allow families to have confidence that gun locks they buy will protect the lives of their children."

The recalled locks look like bicycle cable locks, with a red cable and a black padlock, and were among those distributed to local police departments across the United States.

The locks were given out as part of NSSF's Project Homesafe to promote safe firearms storage. Red vinyl bands around the top and bottom of the locks read "Project" and "Homesafe." The words "Made in China" and "30mm" appear on the bottom of the locks, the commission said.

No injuries or fatalities have been reported as a result of the faulty locks, which can only be put in place on an unloaded gun, according to Doug Painter, the NSSF's executive director.

The NSSF has set up a Gun Lock Hotline to help exchange the faulty locks for improved ones, Paiter said by telephone. The hotline number is (800) 726-6444.

For those who have the faulty locks, Rader advised that they be kept in place until the improved locks arrive.

"In the meantime, any gun lock is better than no gun lock," Rader said. "You should make sure that you are taking other precautions."

More information and a picture of the recalled lock are available online.