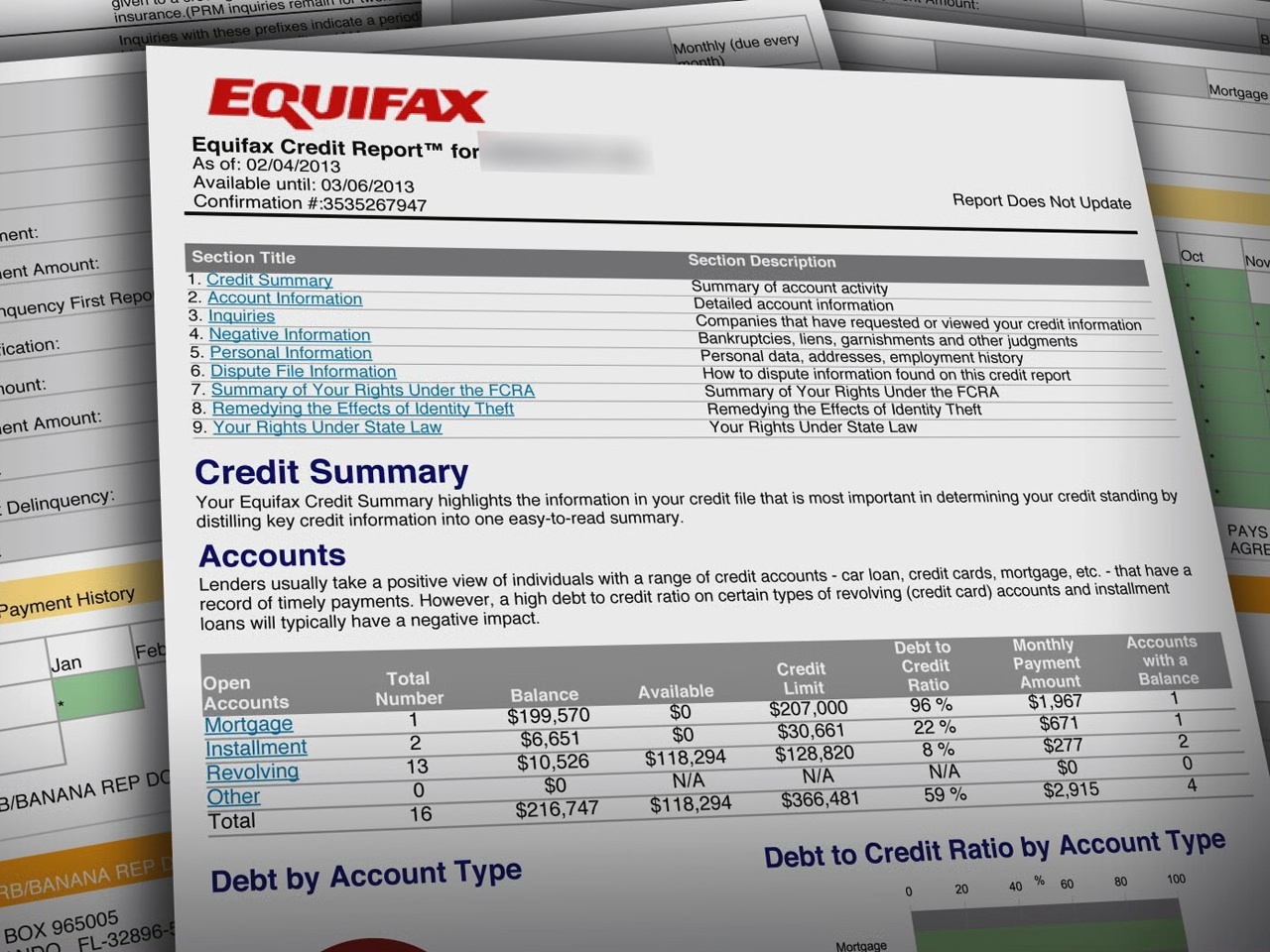 The following script is from "40 Million Mistakes" which aired on Feb. 10, 2013 and was rebroadcast on Aug. 25, 2013. Steve Kroft is the correspondent. James Jacoby and Michael Karzis, producers.

Whether we like it or not, we live in an age where much of what goes on in our daily lives is monitored, collected and sold to interested parties -- our driving records, our medical history, our Internet traffic and, most importantly, our credit information.

A mistake on your credit report can cost you money. It can increase the interest you pay on loans, prevent you from getting a mortgage or buying a car, landing a job or getting a security clearance. Its not uncommon. And as we first reported in February, a government study indicated that as many as 40 million Americans have a mistake on their credit report. Twenty million have significant mistakes.

And our own investigation of the credit reporting industry shows that those mistakes can be nearly impossible to get removed from your record.

Consumer credit reporting is a four billion dollar a year industry dominated by three large companies: Experian, TransUnion and Equifax. They keep files on 200 million Americans and traffic in our financial reputations. They make their money gathering information from people we do business with and selling it to banks, merchants, insurance companies, and employers and they use it to make judgments on our creditworthiness and reliability. But now the reliability of the industry is being questioned in an 8-year Federal Trade Commission. Jon Leibowitz is the chairman.

Steve Kroft: I'm trying to think of another industry where a 20 percent error rate would be acceptable. That's a pretty high error rate.

Mike DeWine: I think the more we look at this and the more the American people know about this, the madder they're going to get.

Ohio Attorney General Mike DeWine has opened his own investigation into the credit reporting industry which for years has blamed mistakes on banks and merchants that provide them with bad information. But DeWine argues that the fault lies with the industry for what he says are clear violations of the Fair Credit Reporting Act.

Steve Kroft: Do these companies have a legal responsibility to make sure that the information is accurate?

Every day, DeWine's office fields calls from desperate constituents who can't get the credit reporting agencies to answer their questions or correct mistakes on their report like paid bills listed as delinquent, closed accounts listed as open, and bad debts that belong to other people with similar names or social security numbers.

Mike DeWine: The problem is not that they make mistakes. It's they won't fix the mistakes. It literally is like this-- you know, guy behind the curtain in "The Wizard of Oz." You really don't know what he's doing. It really is a secret operation that is so hard to crack.

Eight million people a year file disputes about their credit report which usually requires a visit to the Experian, TransUnion or Equifax websites. They are primarily designed to sell you premium products, not resolve a dispute which was what I was trying to do. There's a toll-free number you can call which is likely to connect you to someone on a faraway continent.

[Kevin at credit reporting agency: Thank you for calling. My name is Kevin. How may I help you?

Steve Kroft: Where are you located?

But regardless of where they are or who you talk to, they won't be much help.

Steve Kroft: So, really, you can't do anything for me. I've just been talking to you for 15 minutes. I mean, the only thing you can do is to tell me to fill it out online.

Besides the toll-free number, they also give you a post office box address where you can send a letter and documents supporting your claim. In each case, it's extremely unlikely that anyone with the authority to resolve your dispute will ever actually see it.

Ask Sandra Cortez, a California accountant, whose credit report confused her with an international drug trafficker. It took her five years to get it fixed.

Or David Smith, a retired Army officer whose credit report listed a bankruptcy that wasn't his and triggered a foreclosure proceeding against his house in South Carolina. He is still dealing with the fallout.

Or Judy Thomas, a trauma nurse with a horror story worthy of Hitchcock or Kafka.

Thomas, who manages two medical centers near Cleveland, says it all began in 1999 when she went shopping for a new dress and applied for a store credit card to get a 15 percent discount. She was denied.

Steve Kroft: Was that the first time you'd ever been denied credit?

Judy Thomas: Ever, ever.

But certainly not the last. It became a regular occurrence. The personal credit reports she got from Experian, TransUnion and Equifax were all clean, and without blemish. Yet she kept getting rejected and couldn't find out why.

Judy Thomas: I would get a consumer report and it would look fine. I would go to the bank. And they would tell me, "Oh no, you have all this debt." But no one would tell me what was on there.

Steve Kroft: They wouldn't tell you what the debt was? And they wouldn't give you a copy of the report that they had.

Judy Thomas: No. No.

It took Judy Thomas several years to discover what almost no one knows -- that the credit reports the agencies send to you are different than the ones that they sell to banks, merchants and mortgage brokers. And she only found that out when a loan officer left her file on his desk and walked out of the room.

Steve Kroft: And what did you see?

Steve Kroft: You think this would be a fairly simple thing to get straightened out?

Judy Thomas (in kitchen): This is my Judy Thomas versus Judith Kendall file.

Instead it became a six-year battle with credit agencies, requiring box loads of correspondence to try and prove that she was Judy Thomas, not Judith Kendall, all to no avail.

Steve Kroft: You got a lot of time invested in this. How important are these documents?

Judy Thomas: It's my life.

There are logs of daily phone calls to dispute centers, hundreds of letters to Experian, Equifax and TransUnion, even correspondence from Judith's Kendall's creditors in Utah, acknowledging that the debts on her credit report aren't hers.

Judy Thomas: I would get letters back from these companies, saying, "This, in fact, is not you."

Steve Kroft: You still couldn't get it off your credit report?

Judy Thomas: No, I sent copies to the credit bureaus. And they would come back as mine, verified, verified. I also hired an-- a local attorney to try and straighten it out. We had everything certified that this is Judy Thomas. This is where I live. I've never gone by the name of Kendall. I've never even been to Utah, let alone owing a cable company in Utah.

Steve Kroft: And what happened?

Steve Kroft: What kind of problems did this cause for you?

Finally Judy Thomas took the only recourse available to her. She sued Equifax and TransUnion in federal court. And after a year-long battle, the credit reporting agencies settled for an undisclosed sum and promised to clean up her file.

Steve Kroft: Did you think it was going to take a federal lawsuit?

Judy Thomas: Heck no. It just takes a human being going, "Wow, this isn't Judith Kendall. Let me fix this." That's all they had to do.

But as we discovered, that almost never happens.

If you challenge a credit report and mail your information to a post office box in the United States, the dispute will likely be investigated in India, or the Philippines or South America. We traveled 5,000 miles to the Chilean capital of Santiago where we tracked down three former Experian employees.

Steve Kroft: So, if somebody had a problem with their credit report, they would send the complaint, and it would end up with you?

Steve Kroft: So how many of these did you have to do a day?

Steve Kroft: Did you consider yourself investigators?

Steve Kroft: Did you have any way to investigate these claims?

Carolina Herrera: No, we didn't. You can't call the person.

Steve Kroft: You can't pick up the phone and call them?

Steve Kroft: Did you have phones?

Many voices: No. No.

Steve Kroft: Could you email them?

Steve Kroft: Did you have the authority to say, "Wait a minute," after looking at somebody's file, and say that, you know, "This is a-- somebody made a mistake; this person doesn't owe this money"?

Rodolfo Carrasco: We didn't have that power.

All they did was read the disputes and reduce them to a two-digit code like "never late" or "not mine." It was then sent with a two or three-line summary and no documentation back to the bank or department store that furnished the original information.

Steve Kroft: If there was a difference of opinion between the creditor and the person who was filing the complaint, how was it usually resolved in the-- in favor of the creditor?

Rodolfo Carrasco: Mostly, we took for granted the word of the bank. If the bank said, "Hey, this guy owes $100," so it is.

Sylvia Goldsmith: None of us have ever interviewed anybody in Chile from Experian. We've got a federal court ordering them to bring these people forward. And we're still waiting.

Much of what's known about the inner workings of the consumer credit agencies comes out of lawsuits filed by Len Bennett and Sylvia Goldsmith, who have subpoenaed company records and deposed employees and executives. They say under the current system, there is no way for people like Judy Thomas to get their problems solved.

Steve Kroft: So all these people who take the time to meticulously document a case that the bill isn't theirs or the bill has been paid -- that is never seen by anybody?

Len Bennett: It's not seen by anyone who considers it in determining whether or not information will be removed from a credit report.

Steve Kroft: It's not forwarded onto the person who has the complaint with you?

Sylvia Goldsmith: We can get a jury verdict for $1 million. That's chump change to some of these bureaus. They would rather pay a verdict in $1 million than to actually go in and change the policies and procedures that they have, because that's much more expensive to them.

Len Bennett: I can say this. Without qualification, the dispute procedures used by the credit reporting agencies uniformly used completely fail to comply with the Fair Credit Reporting Act. Courts have found that. The Federal Trade Commission has found that. It's not even a close call.

Mike DeWine: I think the industry's a mess. And I think the impact it has on real people is just unconscionable.

Steve Kroft: You think they're breaking the law?

We wanted to talk to Equifax, TransUnion and Experian. But like most consumers, we were unsuccessful. The agencies referred us to the spokesman for their lobbying group in Washington. He too declined our request for an on-camera interview, but did provide a written statement citing an industry sponsored survey that showed 95 percent of its customers were satisfied with the dispute process. The industry maintains it is in compliance with federal law. And one final update, in February, Jon Leibowitz stepped down as chairman of the Federal Trade Commission.