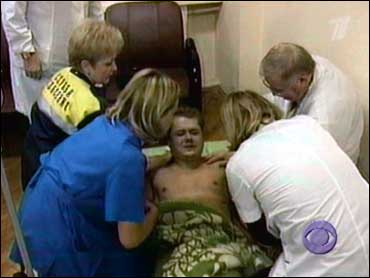 Although it's been four years since they were held hostage in a Moscow theater, life has never returned to normal for Galina and Nikolai Divin.

Not only did they lose their 21 year-old son Andrei in the auditorium, but they also lost their health.

"Before, I was a healthy man with a good life. Now, I simply exist," says Nikolai, who's been battling kidney cancer, liver and stomach ailments, and neurological problems.

They were members of the audience at Moscow's Dubrovka Theater, which was taken hostage by Chechen rebels in October, 2002.

To end the three-day standoff, Russian special forces pumped a secret narcotic gas into the building. Although it incapacitated the hostage takers, it also affected the entire audience.

As a result of the gas and a bungled first aid effort, 130 of the hostages died. Those who did survive inhaled large quantities of the knockout gas, the ingredients of which remain secret.

Russian president Vladimir Putin maintains the gas was harmless...yet no one has ever systematically studied the health of the survivors to find out if that's true.

But CBS News found 101 of the 800 people who lived through the gas attack here, and asked them questions about their health before the siege, afterwards, and now. Almost all of them reported having significant medical problems since the attack--problems they blame on the gas.

Though many of the ailments are typical of post-traumatic stress, others resemble poisoning:

A third of the victims reported kidney or liver trouble.
A third complained of on-going respiratory problems.
And nearly 85 percent say their immune systems have been weakened.

Irina Budnitskaya, now 19, was diagnosed with thyroid cancer after she breathed the gas.

"The week before Dubrovka, I'd had a full physical, with all the tests, blood and others, and was found absolutely healthy," she says.

She can't prove that the gas caused her cancer, but she has her suspicions. "Something happened to our organisms in there," she says.

Tamara Yusipova was a cleaner at the theater. Now, she's on disability.

"I have heart, liver and stomach problems. I am losing my hearing and vision, and my kidneys failed," she says. "Officially the doctors don't say this all is the result the gas, but I think they understand it is."

Alone with the survivors, some Russian doctors do admit the gas was harmful.

But they're afraid to go on the record--and our CBS News investigation found out why. Right after the hostage taking, Moscow medical authorities directly ordered city doctors to play down the effects of the gas.

One physician interviewed by CBS News, who treated several of the survivors, kept copies of her patients' medical records to demonstrate the extent of the cover-up.

At the time of the incident in 2002, this doctor had written that one particular patient had been poisoned by the toxicity of the knockout gas. But city authorities didn't want that on any official reports, and literally made her cross out that conclusion.

"I was told...demanded...ordered, to cross out from final report the word toxicity, she says. "I was ordered to put the only diagnosis: 'victim of crime and terrorism'."

She was told that either she should lie or she would be fired. "I was told that if I want to work on my place I must do as they say," explained the physician.

This doctor--who reviewed and concurred with the results of our investigation--says that authorities could have lessened the number of causalities by organizing the first aid effort better, and by revealing the composition of the gas to the doctors treating the victims.

Survivor Sergei Budnitsky, Irina's father, says that his recovery has been hindered because the doctors were never told what was in the knockout gas. "The doctors are very professional," he says, "but they still don't know what it is they're treating."

Yet not all the survivors are ill. Actor Marat Abdrakhimov has been starring in the Russian version of "cats." He says he cured himself after the Dubrovka attack by taking massive doses of nutritional supplements.

"One of them was called 'Detox', with vitamins and herbs, to drive toxins out of the body--especially the liver," he says. "I gave it to my friends--to the other actors. People were skeptical, but later they thanked me."

He says it's proof that medical authorities could have done more to counteract the effect of the gas.

Both federal and Moscow city medical officials turned down our requests for an interview.

The victims say that's typical of the government's indifference.

"Here we are, two invalids, and do you think our government helps us? Not at all," says Galina Divin. "They don't give a damn."

Other than an initial $1,700 payment, Dubrovka survivors have gotten little help from the Russian government, and no specialized medical care.

Monitoring the survivors' health would have made sense, says the physician, but authorities were reluctant to do so.

"If they will erect some center for health care of these victims, they will say by that, 'yes, the problem exists.' And to my opinion, they try to make it looking as if the problem does not exist."

The Russian government argues the storming of the Dubrovka Theater was essentially a success, because more than 80 percent of the hostages were saved. Without the knockout agent, they say, everyone inside might have died.

Yet the former hostages still doubt president Putin's claim that the gas was harmless.

"There's a way to check that. Let him take his own children, and make them breathe it," says Marat Abdrakhimov.

On this fourth anniversary of the gas attack, the survivors are again calling for a thorough study, to determine if the chemicals used on them were in fact poisonous.

After all, the recipe for the gas remains a Russian government secret--and it may be used again.
by Beth Knobel