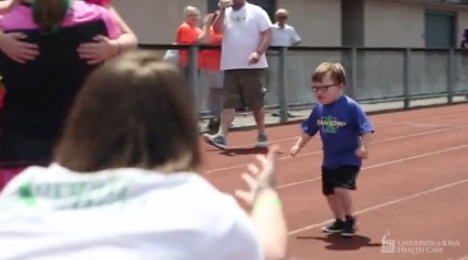 As cheers and whistles near the finish line grew louder, 4-year-old kidney transplant recipient Cooper Vozza picked up the pace.

The youngest participant in this year's Transplant Games of America in Cleveland completed the 25-meter dash with a grin on his face.

He ran into his mom's open arms. And with tears in his eyes, he pumped his fists.

"People are just drawn to him," his mother, Katie Vozza, told CBS News. "At those games, he was like a celebrity."

A video of the adorable celebration was posted on Facebook by the University of Iowa Hospitals and Clinics.

The video was viewed 35,000 times and received dozens of supportive comments for Cooper and his uncle, Kevin Slifka, the man who saved his life.

"To see Cooper do that race -- incredible, amazing," Slifka said in the video. "It makes everything worthwhile to see him doing stuff like that... that nobody thought he would do."

The Des Moines, Iowa, family was transferred to the University of Iowa Children's Hospital in Iowa City where they learned that their son wouldn't need to be on dialysis.

Because Cooper was too small to accept a donor, the family had to wait.

Without giving it a second thought, Slifka volunteered, "I'll give him my kidney." And it turned out, he was a perfect match.

"He's beat a lot of odds," said Vozza, explaining that her son also has the rare Smith-Magenis syndrome, a developmental disorder that affects the body and brain.

At age 3, a year after his transplant, Cooper started walking. Now look at him.

"To see him running is just, you know, unbelievable," his mom said.

The little boy still has a long road ahead of him. Every day brings new challenges, but his parents couldn't be more inspired by his happy spirit.

"He loves life," Vozza said. "I've learned more from Cooper than he's learned from me. He's changed me, showing me every day how to live and how to enjoy life."