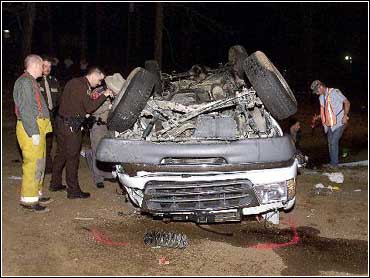 State troopers investigating the van crash that killed four members of the Prairie View track team focused on whether the driver lost control while trying to avoid another vehicle.

Four athletes died and the coach and five other athletes were seriously injured in the rollover Thursday night on State Highway 43 near the Texas-Louisiana border.

The group was on its way to Pine Bluff, Ark., for an indoor track meet when the crash occurred about 7 p.m. Thursday.

Five of the 10 occupants of the 15-passenger van were thrown from the vehicle, said Bryan Barrows, a spokesman for Prairie View A&M.

During a news conference Thursday, Texas Department of Public Safety officials said they were unsure whether another vehicle might have been a factor in the accident.

"Our troopers are investigating that," Rusty Condry, a DPS spokesman, said. "We are in the process of interviewing people now."

Friday afternoon, investigators from several agencies took photos and blocked off a half-mile portion of the northbound lane of the two-lane highway where the accident happened.

A second pair of skid marks were found at the scene, officials said. The approximately 100 feet of skid marks began about 400 feet south of where the northbound van ended upside down in a ditch and curved from the highway's northbound lane to the southbound lane.

Killed in the crash were Houston DeWayne Watson, 21, of Greenville, Texas, the driver; Jerome Deshaun Jackson, 21, of Dallas; Samuel Jason Sturns, 20, of Jasper, Texas; and Vernon Maurice James II, 18, of Vallejo, Calif. Jackson died about an hour after arriving at LSU Medical Center in Shreveport, La. Karnack is about 25 miles northeast of Shreveport.

Watson, the driver, was one of two occupants wearing seat belts, officials said. He was pinned inside the vehicle.

Rose Stock, 42, owner of a bait and tackle grocery store across from the wreck scene, said the accident was horrifying.

"I heard the brakes. I ran out and the van was already rolling," she said.

She said she saw four students on the pavement and ran to one of them.

"I took his pulse and he was gone," she sad. "There were just so many of them. They were scattered out. From one mailbox to the other, there were bodies everywhere."

She said she saw a vehicle drive away from the accident site.

Inside the van, study sheets for health and physical education classes were stuck to the roof. Pairs of socks and a pair of new track shoes were in a blood-splattered bag on one of the seats. The impact of the rollover shaped the roof of the van into a triangle. The dashboard looked like it had exploded.

Greg Greer, the first trooper at the scene, said three passengers were conscious and two were walking around.

Shirley Davis, mother of Arterbery, said her son described the accident as a "bad nightmare."

"I'm doing good. I'm holding my own right now. He (David) is not doing a lot of talking right now," she said.

"Prairie View A&M University has a long and proud history, and I know the entire university family will unite to support each other during this time of sorrow," Bush said.