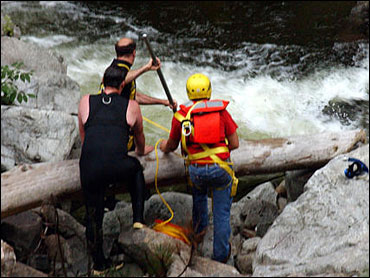 Four teenage camp counselors drowned at a popular swimming hole in the Adirondacks after one fell into the water and three friends dived in to try to rescue him from the raging current.

Authorities recovered one body Tuesday and the other three Wednesday. Using drop cameras on long poles, they found the three bodies trapped under a ledge in a small pool about 20 feet deep.

The four disappeared Tuesday at Split Rock Falls, a series of waterfalls and pools on the Boquet River near Elizabethtown, 110 miles north of Albany.

"This time of year with this much rain, it's a dangerous place to be," State Police Capt. Bruce Dunning said. "It's completely whitewater today."

The four teens had been among about 20 counselors from Camp Baco in Minerva who were spending their day off at Split Rock Falls, said Don Jaquish of Essex County emergency services.

"The force of the water cannot be underestimated," Forest Ranger Ed Russell said.

The teens were identified as Jonah Richman, 18, Adam Cohen, 19, and Jordan Satin, 19, all of Woodmere, N.Y.; and David Altschuler, 18, of Philadelphia.

Richman, Cohen and Satin, all college students, graduated last year from George W. Hewlett High School. Richman and Cohen had been co-captains of the swim team and were considered strong swimmers, but officials said said the current was far too strong.

"These were fine young men, good friends and the fact that they risked and lost their own lives to save another is totally consistent with the students our staff knew and respected," said school district superintendent Charles Fowler.

In their high school yearbooks, under hobbies and interests, each mentioned the summer camp and each other.

"I think their actions speak to their character. They would react no matter what the peril," Hewlett Mayor Mitchell Sahn said.

Russell said accidents are not uncommon at Split Rock Falls, where ledges jut out high over rock-bottom pools.

Bob Maloney, who lives a mile downstream from the swimming hole, told The Press-Republican of Plattsburgh that he once got caught in the current and had to be pulled out of the water by his son.

"When the water's high like this, they ought to send a state trooper down here to say, 'You can look, but no swimming today,"' he said.

Camp owner Bob Wortman released a statement saying: "This is a very sad day for everyone at Camp Baco. These counselors were part of our family and we are all devastated by this loss."