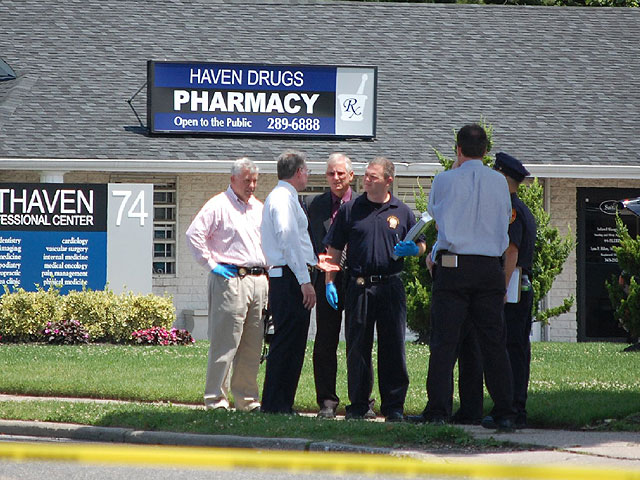 MEDFORD, N.Y. - Police have reviewed a surveillance video from a pharmacy in a New York City suburb where four people were fatally shot over the weekend, including a 17-year-old girl who was to graduate from high school this week.

Newsday reported on Monday that the camera captured images of the suspect: a man in his late 20s or early 30s, about 5-foot-8 with a thin build. He has dark hair, was unshaven or has a dark beard and mustache.

The man was armed with a handgun, stole prescription drugs and killed everyone in the shop before fleeing with a black backpack.

The shootings happened at about 10:20 a.m. inside a family-owned pharmacy in a small cluster of medical offices in Medford, a middle-class hamlet on Long Island about 60 miles east of New York City.

Police rushed to the scene after getting a 911 call from someone in the pharmacy's parking lot. When they arrived, they found two employees and two customers dead, said Suffolk County Police Department's Chief of Detectives Dominick Varrone.

Suffolk County Police identified the dead employees as Raymond Ferguson, 45, of Centereach, and Jennifer Mejia, 17, of East Patchogue. Bryon Sheffield, 71, of Medford, and Jamie Taccetta, a 33-year-old woman from Farmingville, were identified as the two customers.

Jennifer Mejia worked part-time at the pharmacy while attending Bellport High School, where she was finishing her senior year, said her father, Rene Mejia.

"I don't know what happened," he said. "She was supposed to graduate Thursday."

Two teens, who said they were classmates of Mejia, came to the scene after hearing about the shooting from friends on Facebook.

"She was a walking angel on earth," said Kimberly Jimenez, 18, of Brookhaven.

"She gave me a bracelet and said God would watch out for me, Jimenez said.

"Why couldn't God watch out for her?"

News of the shootings stunned neighbors, who said they heard the commotion after police arrived, but saw nothing of the crime.

"It's absolutely crazy. There are no words," said Scott Radice, who lives four houses up the street from Haven Drugs and said he has been a customer for 15 years. "I'm hoping they had cameras in the pharmacy so they can catch this guy."

"This is a family business. Everyone goes there. It is our neighborhood pharmacy," said neighbor Kathy Culhane. "If you had a problem with prescriptions, he'd go to bat for you," she said of the owner, who wasn't at the pharmacy when the shooting happened.

A call left for the man listed in state records as the pharmacy's owner and chief pharmacist, Vinoda Kudchadkar, wasn't returned.