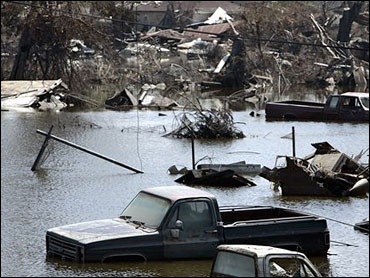 The police department said Thursday it is investigating about a dozen officers suspected of looting during the lawlessness that engulfed the city after Hurricane Katrina.

News reports in the aftermath of the storm put officers at the scene of some of the heaviest looting, at a retail store in the Lower Garden District neighborhood of New Orleans. Some witnesses, including a Times-Picayune reporter, said police were taking items from shelves.

Alfonsi reports that the Times-Picuyane reporter took pictures of police taking DVD's from a local Wal-Mart.

"Out of 1,750 officers, we're looking into the possibility that maybe 12 officers were involved in misconduct," police spokesman Marlon Defillo said.

He rejected the use of the term "looting," and said authorities were investigating "the possibility of appropriation of nonessential items during the height of Katrina, from businesses."

Furthermore, stories of rape and murder inside the Superdome are

being re-examined by police (video)
, reports Alfonsi. National Guard officials were told that there were 200 bodies -- including children with slit throats -- stacked up inside the stadium, but only six bodies were recovered, according to Lt. Col Thomas Beron, who was in charge of security there.

None were children, reports Alfonsi, but the rumors may have hurt the evacuees, because relief workers were told not to respond to cries for help from the convention center because it was simply too dangerous.

Earlier this week, the city's police superintendent, Eddie Compass, resigned after weeks of criticism about the department's conduct during Katrina and its aftermath. On the same day, the department said about 250 police officers could face discipline for leaving their posts without permission during the crisis.

Meanwhile, business owners started streaming back into newly reopened sections of the city Thursday morning at Mayor Ray Nagin's invitation, some vowing to rebuild, some saying they were pulling out.

The areas thrown open to business owners were: the French Quarter; the central business district; and the Uptown section, which includes the Garden District, a leafy neighborhood of antebellum and Victorian mansions. The neighborhoods escaped major flooding during Katrina.

As the mayor invites business owners and residents to return — some say too early — state officials say they are best suited to handle the reconstruction. And some on the Gulf Coast and in Washington want to see a strong federal role to coordinate the huge undertaking and guard against misspending or corruption.

"Right now, it's just like our leaders were dazed during the disaster. I think they're still a bit dazed with just the enormity of the situation," said Rolfe McCollister Jr., publisher of the Greater Baton Rouge Business Report. "Normally, cities build over time. Now suddenly they say, 'Where do we start?'"

"Come in, inspect your property," said Nagin. "If you want to stay, you're free to stay."

Nagin complained that state opposition to reopening the city was feeding a misperception about New Orleans, saying: "We're fighting this national impression that we're tainted, we're not ready."

The disaster's scope has made it difficult even to bring federal, state and local leaders together to discuss the challenges, said Rep. Charlie Melancon, a Democrat who represents a huge swath of southeastern Louisiana.

"Until you get the people back into the community, where do you meet with them? Who are they? Are they the same people that used to be, or is it a whole new cadre of people?" he said. "If I said I knew the answer, I'd be lying to you."

Still, some efforts are moving ahead:

Others have floated the idea of a regional group that ties together the entire Gulf Coast. Some have cited as inspiration the government-driven Tennessee Valley Authority of the 1930s that spurred development across much of the South.

At Igor's, a pub and coin laundry in the Garden District, owner Halina Margan returned after Katrina and never left, despite Hurricane Rita's threat last week. She was ready to open for business on Thursday.

"It's lonely here. We need people," she said.

Blues music poured out the door of Slim Goodies diner, where by 10 a.m., owner Kappa Horn had already served pancakes, bacon and eggs over easy on plastic plates to more than 100 people.

"This is the first hot meal I've had in a month," said George Wichser, a Tulane University police officer who rode out the storm on campus.

Mary Russo parked her car in front of Shanty Too, her niece's boarded-up boutique on chic Magazine Street, and started to cry. Her niece could not bear to come, so Russo and other relatives were there to close the shop for good and bring anything salvageable to her other store closer to Baton Rouge, Louisiana.

"I just can't believe this has happened to the city," Russo said. "So much of this could have been avoided."

The mayor is pushing aggressively to reopen the city despite concerns raised by state and federal officials.

Serious health hazards remain because of bacteria-laden floodwaters, a lack of drinkable water and a sewage system that still does not work, said Stephen L. Johnson, chief of the Environmental Protection Agency.

"There are a whole lot of factors that need to be weighing on the mayor's mind," Johnson said.

He said the EPA was not taking a position on Nagin's plan. But he refused to answer when asked if he would allow his own family to return to New Orleans.

Federal officials said it would take at least another year to clean up all the hurricane debris in Louisiana.