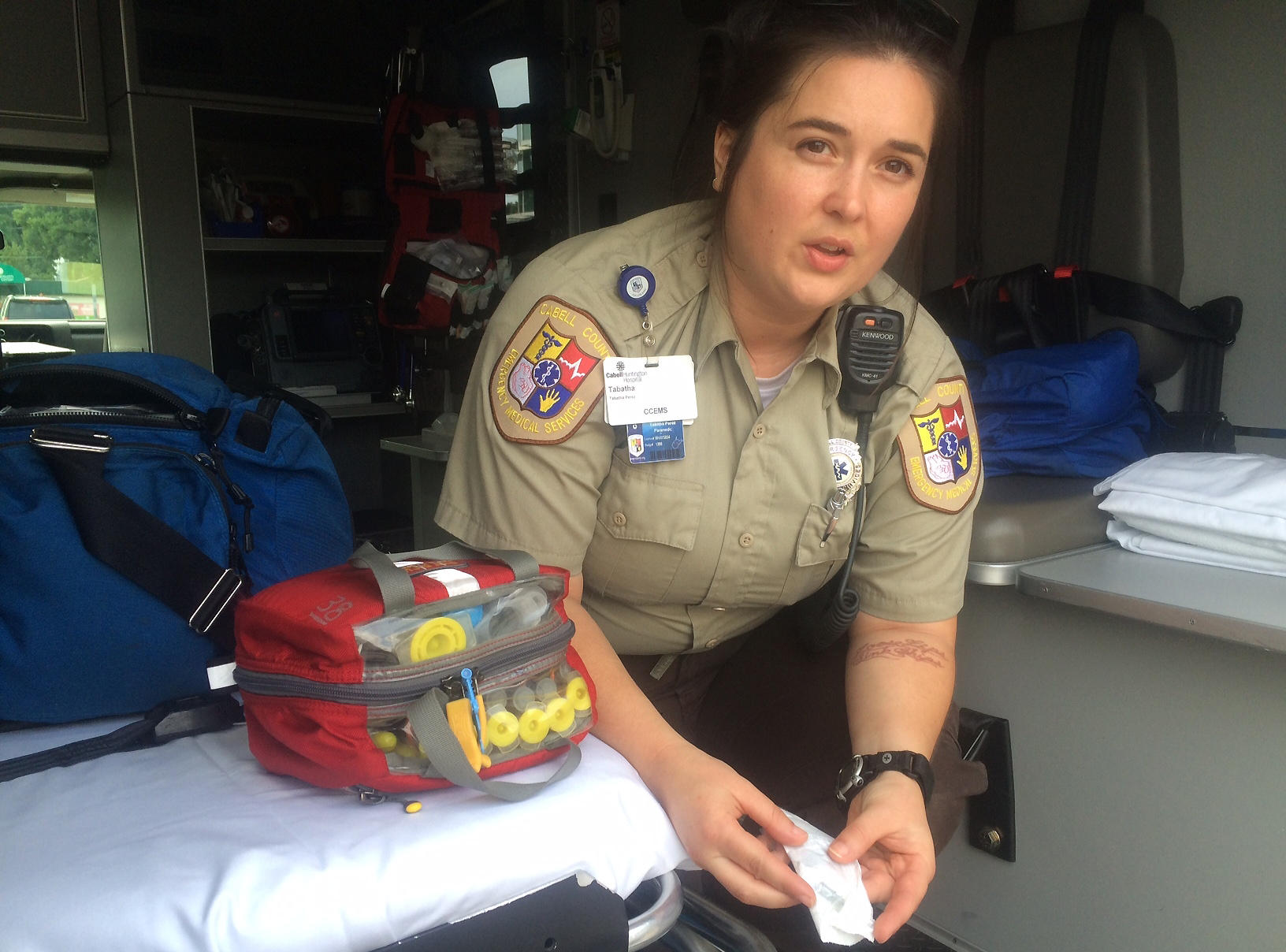 HUNTINGTON, W.Va.  - He found the woman slumped over the steering wheel, an empty syringe on the floorboard and her skin dulling to a purplish blue.

Dave McClure, an EMS supervisor, counted four faint breaths per minute. Without the antidote he carried, she’d be dead in five minutes.

It was 3:25 p.m. on what was, so far, an ordinary Monday. For an EMT in this struggling city, bringing an addict back from the brink of opiate-fueled death counts as routine.

But as McClure searched for an unscarred vein in the young woman’s arm, dozens of others were shooting or snorting the same toxic powder she’d just taken. They started dropping, their muscles seizing, pupils shrinking to the size of pinheads. The heroin epidemic that had been quietly killing by the thousands began boiling to a climax that would traumatize the city and exhaust its emergency responders.

McClure’s radio squawked as he pushed in the IV full of a liquid called naloxone, which blocks the effects of opioids and jolts those overdosing back to life. “We’ve got another overdose,” the dispatcher reported. “We’ve got two more.”

Red lights on the phone at the 911 dispatch center flashed faster and faster until all 16 lines were screaming. They called from the dining room of a rickety house, the parking lot of a fast food restaurant, the bathroom of a gas station.


In the next four hours of Aug. 15, 28 people overdosed in Huntington; 26 of them were saved. One man died at the hospital that night, and another was found dead and alone days later.

Ambulances darted around town as cars pulled up at the hospital, dropped overdosing people at the emergency room doors and sped away. The drugs were so potent that the ordinary dose of naloxone wasn’t enough; responders had to use two, sometimes three doses to bring them back to life.

“It was chaos here,” says Yohlanda Dixon, a 55-year-old who lives in the neighborhood where dozens overdosed. “They were all dropping the same time, like boom boom boom boom boom. That’s what was so scary. You knew they were fixing to die. And that’s the last thing you want to see, someone die right in front of you.”

But it didn’t stop there.

The string of mass poisonings stretched across Appalachia and the Midwest. The chaotic scene in Huntington has repeated day after day, in big cities and small towns, in Kentucky, Ohio and Indiana. Health and law enforcement officials in Tennessee alerted residents to the danger and asked them to seek help to end their dependency.

In Louisville last week, an emergency room doctor was so startled by the number of patients and the potency of the drugs that he declared a public health emergency.

Law enforcement had warned for months that batches of heroin were hitting the streets laced with potent drugs like synthetic fentanyl or carfentanil, an elephant tranquilizer 100 times more powerful than heroin.

“We knew this day would happen. We didn’t know what it would be like, but we knew it was just a matter of time,” says Jan Rader, Huntington’s deputy fire chief and a registered nurse.

When the day came, a 36-year-old Huntington woman was among its victims.

The woman told her story to The Associated Press on the condition her name not be used, for fear of retribution. She’s battled drug addiction for 20 years, starting with pain pills she got for an ankle injury at 16. Her mother was an addict too, she says, and it didn’t take long to start crushing and snorting them. She turned to heroin about three years ago, when law enforcement cracked down on the painkiller trade that had ravaged Appalachia, and pills became harder to find.

She and her husband live in a house on Sycamore Street, adjacent to Marcum Terrace, a sprawling public housing complex of squat brick buildings that has long been at the heart of this city’s drug epidemic. Police believe the laced drugs were sold there, and most of the overdoses happened in the complex and the tangle of narrow streets that butt up against it.

A friend brought the powder to the woman’s house. Her friend took it first, then her friend’s boyfriend, then the woman herself.

She knew something wasn’t right as soon as she snorted it - she felt her throat closing.

Her friend dropped to the dining room floor.

She knelt over her friend and started CPR, watching her own fingernails turn blue as she pushed down on her chest. All the while, she struggled for air. It felt, she says, like she was being stabbed with an invisible knife.

She remembers little after that.

Her husband got home and found the three of them, their skin the color of his bluejeans. He thought they were dead, tried CPR himself, then ran out to the street and screamed.

Around 3:30 p.m., a police officer arrived and shot her twice with naloxone.

She remembers opening her eyes, feeling terror, then shame. She promised she’d never do it again, and still hadn’t, she says, two weeks later.

At 3:39 p.m., three people had collapsed inside an apartment.

At 3:45 p.m., McClure arrived alone at a house and found a man in his 50s in the bathtub, not breathing. His friends had turned on the water to try to revive him; they were shouting, crying, smacking him in the face. A younger man lay dying in the same bathroom.

McClure was alone with them for a few minutes, but in the bedlam it seemed like an hour. Other medics arrived and they used naloxone to bring them both back.

He got in his truck and left for the next call.

Huntington sits on the Ohio River at the corner of West Virginia, Kentucky and Ohio. It was once a bustling railroad depot where trains packed with coal barreled through. But the coal industry collapsed. People lost jobs, lost hope, and now nearly one-third of residents live in poverty.

West Virginia’s rate of drug overdose deaths is the highest in the nation, according to the Centers for Disease Control and Prevention, and Huntington’s is higher still. At least 944 people overdosed last year in the county, says Scott Lemley, an intelligence analyst with the Huntington Police Department who estimates that nearly 14 percent of residents are addicted to drugs.

It seems to be growing worse. At this time last year, EMTs had administered 130 doses of naloxone, says Steve Murray, the EMS assistant director. This year, they’ve given 307.

In the chaos, detectives started searching apartments, trying collect evidence about who was handing out the tainted drug. Within days, police would arrest an Ohio man named Bruce Lamar Griggs in connection to some of the Huntington overdoses.

But they learned long ago that arresting dealers wouldn’t solve the problem. People keep dying.

The city last year started an office devoted to drug control policy led by former police chief Jim Johnson. They train citizens every Wednesday on how to use naloxone; police officers started carrying the drug; even the mayor keeps a dose in his pocket. Many more would certainly have died on Aug. 15 without it.

Still, the people they brought back to life have no place to go for help, even if their experiences scared them enough to get clean.

West Virginia has only 28 detox beds. There are just eight in Huntington, and they’re always full. Medics revive the same people, again and again and again.

Even Johnson, who heads the drug policy office, wonders if it will ever end.

“It consumes me,” Johnson says. He considers himself a tough old cop, one who struggles to deal with problems that have no obvious solutions. “If you were working an armed robbery, eventually you’re going to be able to figure it out. There’s not an answer out there for this.”

There are up days and down days, he says, and Aug. 15 was both: Yes, responders saved 26 lives, but only because they had had so much practice.

They brought people back to life in apartments, on street corners, in the bathroom of a gas station.

Dixon, who lives in an apartment in Marcum Terrace, stepped out of her back door to take out her trash around 5 p.m. She saw a man, scrawny and staggering near the wood line in her back lawn. She watched him topple over, face down into the grass, and ran to him. His lips were already turning gray.

She screamed for help and the paramedics ran over, shot him twice with naloxone and he finally came to. They told him “he came within a hair of dying,” yet he got up and walked to an ambulance.

McClure recalls the rest of the day in flashes: a man lying on a trail in the woods at 5:15 p.m., surrounded by syringes; a man and woman in a house nearby at 6:20 p.m.; a middle-aged man who’d been dragged to the sidewalk and left for dead at 6:30.

Some cried when they awakened and realized they’d come within minutes of dying, McClure says. Some fought, some shrugged, some said thank you and apologized.

“Most of the time they don’t want that life - what brought them there, I don’t know. They don’t want this for their children either, and they feel terrible guilt. But they’re caught in their own battle,” McClure says. “At the end of the day, we gave 26 people another chance at finding recovery. That’s how I try to look at it. Hopefully, maybe they’ll all live.”

McClure’s next shift, a few days later, returned to routine: 12 overdoses. It was a good day, by comparison.