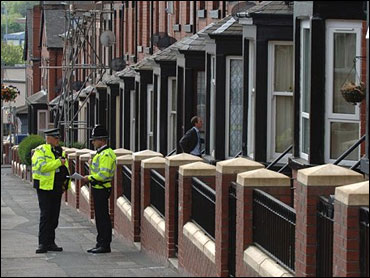 British police arrested four people Wednesday in connection with the suicide bombings that killed 52 bus and subway passengers in London in 2005.

Two men and a woman were arrested in West Yorkshire, Metropolitan Police said, and West Midlands Police said a 22-year-old man was arrested in the central city of Birmingham.

All were arrested on suspicion of the commission, preparation or instigation of acts of terrorism and were being taken to London for interrogation, police said.

Searches were under way at two flats in Birmingham, and at five addresses in West Yorkshire — two houses in Dewsbury, two houses in the Beeston neighborhood of Leeds and one house in Batley, police said.

Mohammed Sidique Khan, identified as one of the four London bombers, was a resident of Dewsbury and had grown up in Beeston.

Police refused to confirm a British Broadcasting Corp. report that Khan's wife, Hasina Patel, 29, was among those arrested.

"We never discuss the identity of people who have been arrested," a police spokeswoman said on condition of anonymity in line with force policy.

The bombers struck on three subway trains and a double-decker bus on July 7, 2005 — the worst terrorist attack in British history.

In March, police arrested three people, all from the same West Yorkshire area as three of the four suicide bombers. They were charged on April 5 with conspiring with the attackers.

Those charged then were Mohammed Shakil, of Beeston, Sadeer Saleem, of Beeston and Waheed Ali, who recently lived in London but was formerly from Beeston.

London's Metropolitan Police said they were continuing a "painstaking investigation with a substantial amount of information being analyzed and investigated."

"As we have said previously, we are determined to follow the evidence wherever it takes us to identify any other person who may have been involved, in any way, in the terrorist attacks," the department said. "We need to know who else, apart from the bombers, knew what they were planning. Did anyone encourage them? Did anyone help them with money, or accommodation?"