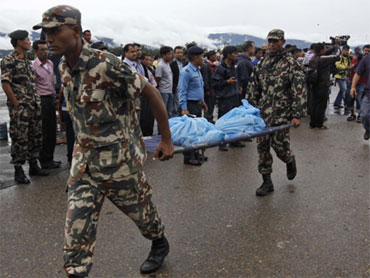 A small passenger plane heading to the Mount Everest region crashed in heavy rain Tuesday outside Nepal's capital, killing all 14 people aboard, including four Americans, a Briton and a Japanese national, officials said.

The German-built Dornier turboprop airplane was carrying 11 passengers and three crew members. It was headed to Lukla - a popular stop for trekkers and mountaineers - when cloud cover there forced it to turn back to the capital.

Ram Bahadur Gole, a villager who witnessed the accident, told Avenues Television network that the crash impact broke the plane into several pieces that were scattered on a hillside.

Tri Ratna Manandhar of the Civil Aviation Authority of Nepal confirmed there were no survivors. Manandhar said there were four Americans, one Briton and one Japanese aboard, while the remaining passengers and crew were Nepalese.

After an initial delay in reaching the crash site because of poor weather conditions, a rescue helicopter retrieved some of the bodies to Katmandu late Tuesday. Prime Minister Madhav Kumar Nepal and American and Japanese diplomats were at the airport.

The bodies would be moved to a Katmandu hospital for identification, and retrieving the rest of the remains from the remote crash site would continue Wednesday, officials said.

The rescue coordination office at Katmandu's Tribhuwan International Airport said in a statement that soldiers had initially reached the crash site on foot. The area has no roads and is only accessible by foot. The route from the nearest town was blocked by a river flooded by monsoon rainfall.

Lukla is the only air strip in the Everest region. Thousands of trekkers and mountaineers fly there every year to begin their journey to Everest and surrounding peaks and trekking trails. However, few travel there during the monsoon season. It is little more than a runway carved into the side of the Himalayas at an altitude of 9,200 feet.

The Dornier 228 twin-turboprop had its first flight in 1981. A total of 270 were built by German planemaker Dornier and India's HAL. About 120 of those remain in service worldwide.

According to the US-based Aviation Safety Network, 29 have been lost in various accidents, with a total of 122 fatalities.