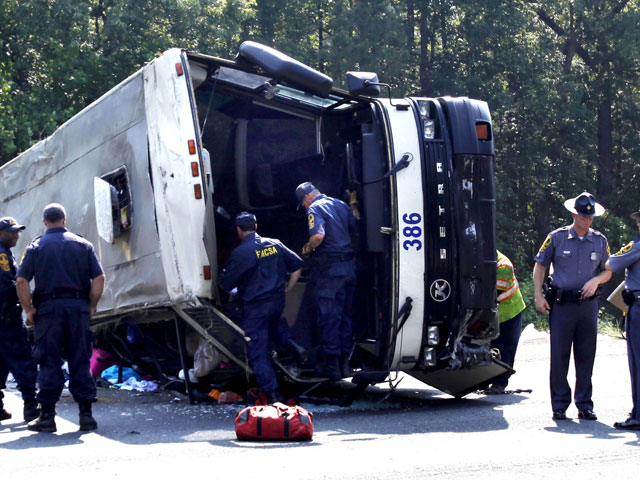 GREENSBORO, N.C. — A North Carolina-based bus company was ordered Saturday to cease operations because government inspectors say the company hires drivers who don't have the required licenses or who aren't medically examined and qualified. It was the third company ordered to shut down within a few days in a string of inspections that follows the deaths of four people in a wreck involving a bus owned by another North Carolina company.

The Federal Motor Carrier Safety Administration of the U.S. Transportation Department said Saturday it has ordered Greensboro-based United Tours Inc. to cease all passenger service because of reckless business practices that show a flagrant disregard for federal safety regulations.

The order lists several violations regarding the company's drivers and says they present a potentially deadly situation for the drivers, passengers and other motorists.

Andy Gao of New York City, who identified himself as spokesman for United Tours' owner, said the company plans to hire new drivers for the company's six buses.

The FMCSA earlier ordered Sky Express Inc. of Charlotte to shut down after an accident on May 31 in Virginia that killed four passengers and injured dozens of others. Within days, the government had to order the company to shut down again after investigators discovered the carrier was repainting its buses and continuing to sell tickets under the names 108 Tours and 108 Bus.

The Sky Express bus driver is being on four felony counts of involuntary manslaughter and has another hearing scheduled for Wednesday.

Also Saturday, the government ordered Haines Tours of Gladwin, Mich., to cease commercial bus operations after passengers were found in a luggage compartment with mattresses and pillows during a trip to Ohio. And on Thursday, regulators shut down Georgia-based JCT Motor Coach Inc. for the second time since 2009, saying the company changed its name to avoid a previous order to cease operations because of safety violations.