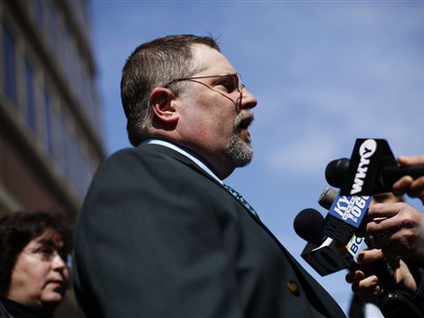 PHILADELPHIA - A third man has filed a civil lawsuit charging that officials from the Archdiocese of Philadelphia covered up sexual assault allegations against a priest who molested him.

The lawsuit filed Wednesday in the city's Court of Common Pleas says the man was assaulted as a boy by a priest from St. Francis Xavier parish and Roman Catholic High School in Philadelphia.

Francis Finnegan, 49, said he was molested by the Rev. John Kline at the age of 7, when the priest accompanied his family on a trip to the New Jersey shore in 1968 or 1969. He said he had repressed the traumatic event and only began to remember the abuse three years ago.

"He had dinner at our house every Thursday night for 30 years," Finnegan said, adding that his mother was Kline's longtime parish secretary. "He betrayed us on a level that's hard to imagine."

The Associated Press generally does not identify people alleging sexual abuse. But Finnegan said he wanted his name printed in an effort to support other victims and push for change.

"I don't want somebody who's 7 today to be me in 40 years," he said. There are families who "don't know monsters live among them" because the archdiocese has shielded the pedophiles, he said.

Finnegan, a postal carrier, was surrounded by his wife and three children as he spoke at a news conference in front of the archdiocese headquarters in downtown Philadelphia. He said his brother, Jack Finnegan, 58, who lives in California, was also abused by Kline in the 1960s and wanted his name made public too.

Kline, who died in 1996 at age 73, was considered a member of the family, performing family weddings and baptisms, accompanying them on family trips and saying Mass in their home, Finnegan said.

The lawsuit says archdiocese officials put Finnegan in harm's way when they concealed knowledge of earlier abuse allegations against Kline, who is not among the priests identified as suspected pedophiles in a grand jury report released last month.

"I wanted his name on the record as someone who was an offender," Finnegan said of his lawsuit.

A spokeswoman for the archdiocese did not immediately return a call seeking comment.

Finnegan also contends victim advocates employed by the archdiocese in recent years aim to protect the church, not victims.

It is the third such lawsuit since last month's grand jury report led to criminal charges against three priests and a high-ranking archdiocese official charged with failing to protect children from predator priests. The grand jury report has emboldened victims to come forward but is not directly related to the recent civil suits, their attorneys have said.

Finnegan's lawsuit is different than two others filed in recent weeks because the alleged assault occurred in New Jersey, where laws are more favorable to victims of childhood sex abuse, said Hamilton, a law professor at Yeshiva University and co-counsel in the recent Pennsylvania lawsuits.

Victims have until age 30 to file civil suit in Pennsylvania, which nine years ago raised the age limit from 20. In New Jersey, victims have two years from the time they discover they have suffered injury resulting from the sexual abuse.