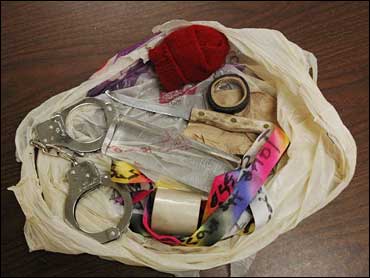 A group of third-graders plotted to attack their teacher, bringing a broken steak knife, handcuffs, duct tape and other items for the job and assigning children tasks including covering the windows and cleaning up afterward, police said Tuesday.

The plot involving as many as nine boys and girls at Center Elementary School in south Georgia was a serious threat, Waycross Police Chief Tony Tanner said.

School officials alerted police Friday after a pupil tipped off a teacher that a girl had brought a weapon to school. Tanner said the students apparently planned to knock the teacher unconscious with a crystal paperweight, bind her with the handcuffs and tape and then stab her with the knife.

"We did not hear anybody say they intended to kill her, but could they have accidentally killed her? Absolutely," Tanner said. "We feel like if they weren't interrupted, there would have been an attempt. Would they have been successful? We don't know."

The children, ages 8 to 10, were apparently mad at the teacher because she had scolded one of them for standing on a chair, Tanner said.

Two of the students were arrested on juvenile charges Tuesday and a third arrest was expected. District Attorney Rick Currie said other students told investigators they didn't take the plot seriously or insisted they had decided not to participate.

"Some of the kids said, `We thought they were just kidding,"' Currie said. "Another child was supposed to bring a toy pistol, and he told a detective he didn't bring it because he thought he would get in trouble."

Police seized a steak knife with a broken handle, steel handcuffs, duct tape, electrical and transparent tape, ribbons and the paperweight from the students, Tanner said.

Currie said he decided to seek juvenile charges against two girls, ages 9 and 10, who brought the knife and paperweight and an 8-year-old boy who brought tape. He said all three students faced charges of conspiracy to commit aggravated assault, and both girls were being charged with bringing weapons to school.

Nine children have been given discipline up to and including long-term suspension, said Theresa Martin, spokeswoman for the Ware County school system. She would not be more specific but said none of the children had been back to school since the case came to light.

The purported target is a veteran educator who teaches third-grade students with learning disabilities, including attention deficit disorder, delayed development and hyperactivity, friends and parents said.

The scheme involved a division of roles, Tanner said. One child's job was to cover windows so no one could see outside, he said. Another was supposed to clean up after the attack.

"We're not sure at this point in the investigation how many of the students actually knew the intent was to hurt the teacher," Tanner said.

He said the teacher told detectives the children involved weren't known as troublemakers.

"You can't dismiss it," Tanner said. "But because they are kids, they may have thought this was like a cartoon - we do whatever and then she stands up and she's OK. That's a hard call."

The parents of the students have cooperated with investigators, who aren't allowed to question the children without their parents' or guardians' consent, he said. Authorities have withheld the children's names.

Martin told The Florida Times-Union of Jacksonville, Fla., that administrators would follow school system policy and state law in disciplining the students.

"From what I understand, they were considered pretty good kids," Martin said. "But we have to take this seriously, whether they were serious or not about carrying this through, and that's what we did."

Four mothers of other third-grade students at Center Elementary called for the immediate expulsion of the suspected plotters.

Stacy Carter and Deana Hiott both cited school system policy stating that any student who brings "anything reasonably considered to be a weapon" is to be expelled for at least the remainder of the school year.

"We don't want our children around them," Carter told the Times-Union. "The one with the knife could have stabbed my child or someone else's child at lunch or out on the playground."

"This is an isolated incident, an aberration. ... We have good kids," Center Principal Angie Coleman told the newspaper.