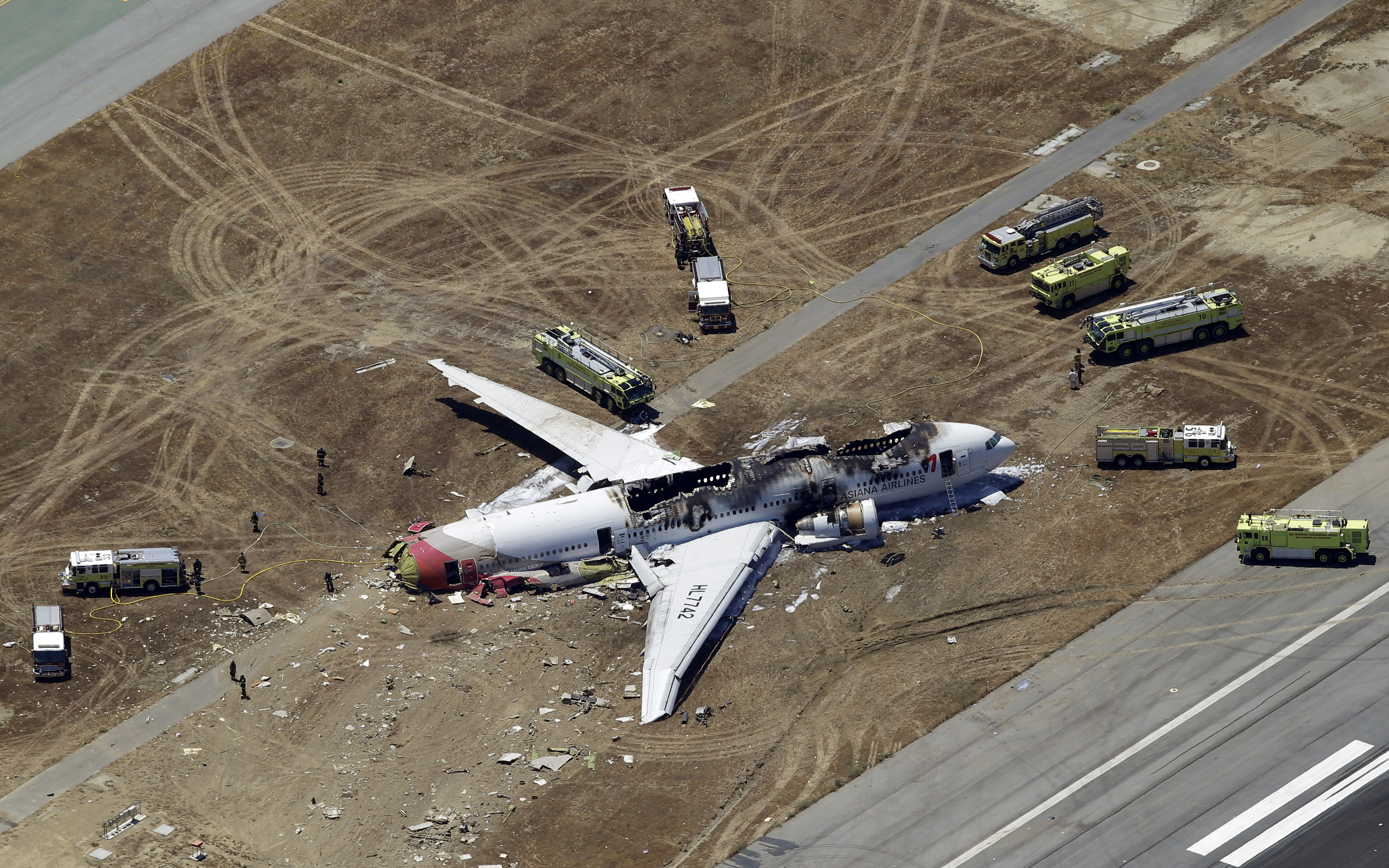 San Francisco General Hospital confirmed Friday the death of a girl in the crash of Asiana Airlines flight 214, making the death toll now at three, CBS News has learned.

The hospital said she had been in critical condition since arriving Saturday after the accident. Officials did not identify the girl at the request of her parents. Her age was also withheld.

Meanwhile, one of the Chinese teenagers who died in the disaster was struck by a fire truck while she was covered in foam that crews had sprayed to douse the fire aboard the plane, police said Friday.

It wasn't clear, however, whether 16-year-old Ye Meng Yuan was already dead or whether she was alive after the crash Saturday at San Francisco airport.

Authorities were still trying to determine the cause of death, and San Mateo County coroner Robert Foucrault said his initial results would likely be released sometime next week. He would not comment on the police investigation.

Police officials confirmed that she was hit by the truck. She was on the ground and covered in the foam.

"When the fire truck repositioned itself to continue battling flames from the fuselage, the victim passenger was found in the tire track of the fire truck," police spokesman Albie Esparza said.

Asiana Flight 214 collided with a rocky seawall just short of its intended airport runway on Saturday. Two people were killed and dozens of others injured although most suffered minor injuries. Investigators have said the plane came in too low and slow.

Nearly a week after the crash, investigators have pieced together an outline of the event -- what should have been a smooth landing by seasoned pilots turning into a disaster.

With each new bit of information, the picture emerging is of pilots who were supposed to be closely monitoring the plane's airspeed, but who didn't realize until too late that the aircraft was dangerously low and slow. Nothing disclosed so far by the National Transportation Safety Board investigators indicates any problems with the Boeing 777's engines or the functioning of its computers and automated systems.

"The first thing that's taught to a pilot is to look at the airspeed indicator. It is the most important instrument in the cockpit," said Lee Collins, a pilot with 29 years and 18,000 hours experience flying a variety of airliners. "Airspeed is everything. You have airspeed, you live. You don't, you die."

Investigators are still trying to nail down hundreds of details about the crash last Saturday that killed two people and injured dozens. NTSB Chairman Deborah Hersman has cautioned against reaching conclusions.

The flight's four pilots have been interviewed, as have passengers and dozens of witnesses. Air traffic control recordings and video of the flight's last moments, including the crash itself, have been examined.

Here's what investigators have revealed about a Seoul-to-San Francisco flight that was normal until its last minutes, when the wide-body jet carrying 307 people rapidly lost altitude:

The pilot flying the plane, Lee Gang-kuk, 46, had nearly 10,000 hours of flying experience, but just 35 hours flying a Boeing 777. He had recently completed training that qualified him to fly passengers in the 777, and was about halfway through his post-qualification training. He was seated in the left cockpit pilot seat. In the co-pilot position was Lee Jeong-Min, an experienced captain who was supervising Lee Gang-kuk's training. It was Lee Gang-kuk's first time landing a 777 in San Francisco.

At 11:19:23 PDT, after a nearly 11-hour flight, the plane was traveling over the San Francisco Peninsula. The weather was near perfect, sunny with light winds.

Lee Jeong-Min and a third pilot sitting in a jump seat just behind the main seats, a first officer, were supposed to be monitoring the plane's controls. One of their most important jobs was to closely monitor the plane's two airspeed indicators. In the U.S., if an amber bar is more than five knots above or below the target speed during landing, the pilot flying is supposed to abort and make another attempt, according to pilots interviewed by The Associated Press.

The flight data recorder shows the plane's autothrottle -- similar to a car's cruise control -- was set on idle during the approach, Hersman said, and that there were multiple commands at times given to the autothrottle and autopilot.

At 11:26:58 and 1,000 feet, the pilots made contact with the airport tower. When they were cleared to land 12 seconds later, the plane's altitude had dropped to about 600 feet. The plane was configured for its approach and the landing gear was down. The airspeed was about 149 knots. A target speed of 137 knots was set.

At 500 feet there was an audible automated altitude alert. The airspeed was about 134 knots. At this point that pilots realized they weren't properly lined up with the runway, Hersman said.

"Between 500 and 200 feet, they had a lateral deviation and they were low. They were trying to correct at that point," she said.

At 200 feet and another automated altitude call out, the airspeed had slowed to 118 knots -- well below the target level.

At this point, U.S. pilots would typically call for an aborted landing because the plane was more than 5 knots below its target speed, Collins said. But at no point in between 500 and 100 feet does the voice recorder show the pilots making any comment related to airspeed, Hersman said at a briefing Thursday.

Hersman said at earlier briefings that it was not until 200 feet -- 16 seconds before impact -- that Lee Jeong-Min, the instructor pilot "recognized the auto-throttles were not maintaining speed."

At 125 feet and 112 knots, both throttles started moving forward, indicating more fuel was being sent to the engines to increase power and speed. That was eight seconds before impact. Even if the autothrottles weren't fully turned on, either of the pilots in the two front seats could reach down and manually push the throttle levers forward to increase power.

It was about this time that the cockpit voice recorder indicated the first officer -- the third pilot seating behind the front two pilots -- realized the plane was traveling too slowly and called for an increase in speed.

A second later, Lee Gang-kuk's yoke can be heard rattling violently on the voice recorder. This is the sound of a stick shaker going off, a piece of safety equipment that tells a pilot the plane is about to stall because it has slowed to a dangerous speed and lost lift.

When the pilots in the two front seats realized the plane was in trouble, they both reached for the throttle. Passengers heard a loud roar as the plane revved up in a last-minute attempt to abort the landing.

At three seconds before impact, the plane reached its slowest speed of 103 knots. Its engines were at 50 percent power and power was increasing. At this time, one of the pilots called for an aborted landing.

At one and a half seconds before impact, another of the pilots calls for an aborted landing.

At 11:28, with the airspeed up three knots, the landing gear, followed by the plane's tail, collided with the seawall just short of Runway 28 Left. The plane careened wildly before slamming down onto the tarmac and sliding about 1,000 feet. The tail was sheared off and three flight attendants seated in the back of the plane fell out. Rocks from the seawall and pieces of the mangled landing gear were strewn along the runway.

The NTSB's investigation is being followed closely by pilots in the U.S. and around the world. At one gathering of pilots in Dallas Wednesday night, the discussion centered on why the Asiana pilots didn't realize their low speed sooner. No one had an answer.

"There are a lot of very experienced airline pilots who are scratching their heads right now," Collins said.

Meanwhile, crews removing the plane's wreckage encountered smoke early Friday morning. The smoke was captured by KGO-TV cameras, and the news station said it occurred moments after crews used a sling to lift the fuselage.

Heat and friction generated while crews were cutting the fuselage of Asiana Flight 214 might be to blame for the smoke, airport spokesman Doug Yakel said.

He said fire trucks at the scene doused the smoke before it turned into a fire.

Yakel said the fuselage was cut into two pieces to make it easier to transport. Much of the wreckage has now been removed from the site.

Airport officials hope to re-open the runway by late Sunday. The closure has led to flight cancellations and delays.