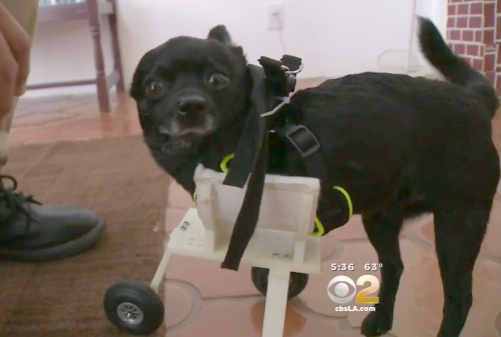 CAMARILLO, Calif. -- Leo, a Chihuahua from California, was born without front legs.

He looks more like a bunny or kangaroo when he hops around rather than a dog.

"We immediately clicked, and he's basically been with me ever since," she told CBS LA.

He makes his way around just fine and doesn't seem to know he's any different from other dogs. But Bocz said as Leo gets older, his shoulders are starting to get tired. So she called Cal State Channel Islands to see if the college could help.

"It was love at first sight. He's such a cuddly little guy. And I thought: 'Yeah, I'll help you with this.' Let's see what we can put together," said Phil Hampton, professor at Cal State Channel Islands.

What they put together was a one-of-a-kind prosthetic device made with a 3D printer. After a few adjustments, Leo was off and running.

The prosthetic works like a wheelchair. Leo's shoulders sit in the custom harness, allowing his back legs to move around and giving him the freedom to run and play like never before.

"It's like watching your child walk for the first time. Just watching him actually use his back legs like regular walking motion and wagging his tail. I see the potential that lies ahead for him. I'm very, very happy," Bocz said.

The professors at Cal State Channel Islands said they plan to put their design online so that anyone with a 3D printer can make the same prosthetic for their pet.