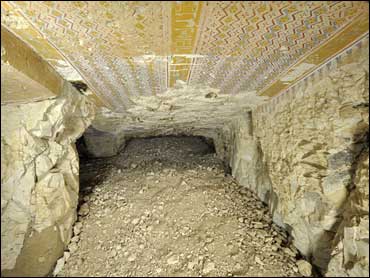 Belgian archaeologists have unearthed a 3,500-year-old pharaonic official's tomb that had disappeared under sand in southern Egypt after it was originally discovered 129 years ago.

Egypt's Supreme Council of Antiquities said in a statement on Sunday that the Belgian team in Luxor uncovered the tomb of Amenhotep, the deputy seal-bearer for King Thutmose III who ruled Egypt in the 18th Dynasty.

The tomb was first discovered in 1880 by Swedish Egyptologist Karl Piehl, but it was later buried under sand until the Belgian team found it again this year.

Bavay said that because the tomb was first uncovered when archeological study in Egypt was in its infancy, the discovery and scientific analysis of a tomb such as Amenhotep's was likely haphazard.

"In the late nineteenth century at a time when Egyptology was not completely organized, and especially the study of this private necropolis, Theban necropolis, that is located between the Valley of the Kings and the Valley of the Queens, the study was not really organized," bavay said. "And people, scholars were just coming there spending some time there discovering tombs, taking some notes, going back, publishing them, and then the tombs were forgotten."

On Monday, the head of the Belgian Archeologists team, Laurent Bavay, said he believed that properly excavating the tomb would be two or three seasons' work.

Bavay said the tomb had served multiple purposes throughout history. "These tombs were also re-used later in antiquity," Bavay said. "And especially in the late antiquity the tomb was re-used and transformed into a hermitage by Christians, by Coptic monks."

He said paintings on the walls themselves were in the most part destroyed but the ceiling inscriptions were in good condition.

"It seems that this destruction dates back to earlier in the 19th century, before the visit of this Swedish Egyptologist, and it was destroyed mainly by tomb robbers."