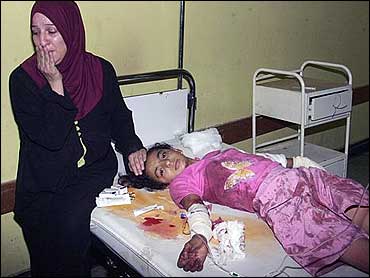 A series of bombs killed 35 children and seven adults Thursday as U.S. troops handed out candy at a government ceremony to inaugurate a new sewage treatment plant. Hours earlier, a suicide blast killed a U.S. soldier and two Iraqis on the capital's outskirts.

The bombs in Baghdad's al-Amel neighborhood caused the largest death toll of children in any insurgent attack since the conflict in Iraq began 17 months ago.

"The Americans called us, they told us, 'Come here, come here,' asking us if we wanted sweets. We went beside them, then a car exploded," said 12-year-old Abdel Rahman Dawoud, lying naked in a hospital bed with shrapnel embedded all over his body.

Two bombs went off in quick succession at the ceremony about 1 p.m., then were followed by a third explosion a short distance away, said Interior Ministry spokesman Col. Adnan Abdul-Rahman. He said there were two suicide car bombs and one roadside bomb; the Americans said all three were car bombs.

The explosions killed 42 people and wounded 141, including 10 U.S. soldiers. The wounded included 72 children under the age of 14, said Dr. Mohammed Salaheddin.

Iraqi Foreign Minister Hoshyar Zebari said he was disturbed by the televised images of the attacks, and he denounced the "criminal gangs, terrorists or Saddamists who are trying to undermine iraq, to undermine the political process."

He also said the ongoing violence showed how important it was to quickly train Iraqi military and security forces and improve intelligence gathering so the country does not fall to control of militants.

"The Iraqi people have suffered enough at the hands of these people," Zebari said on CNN, speaking from London. "We want a new Iraq, a different Iraq."

The day of violence across Iraq, including insurgent attacks and U.S. airstrikes in Fallujah, left a total of 46 people dead and 208 wounded.