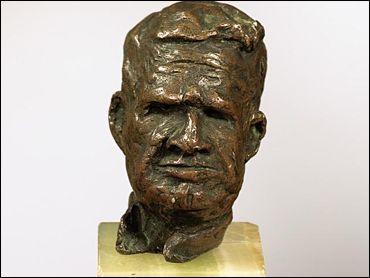 A bronze bust of Spencer Tracy sculpted by Katharine Hepburn sold for $316,000 Friday on the second day of an auction of the late actress' estate.

The bust, sitting on a green onyx and marble pedestal, was purchased by an anonymous telephone bidder, said Patty Fox, a spokeswoman for Sotheby's.

It was the highest price fetched at the two-day event thus far.

After spirited bidding in the room, the competition "came down to two determined bidders on the phone who bidded very slowly and deliberately," Fox said.

Hepburn made the bust of her longtime love and frequent co-star in the 1960s. She considered it one of her prized possessions. It sat on a bedside table in her New York City town house and often went with her when she traveled.

It was featured in the 1967 movie, "Guess Who's Coming to Dinner," Tracy's last film and in which they both starred.

On Thursday, a diamond and sapphire brooch given to the silver screen icon by her one-time beau Howard Hughes sold for $120,000.

The items were among hundreds offered at the auction, including the Hollywood star's furniture, clothing, studio photographs, movie contracts and membership cards in the Screen Actors Guild and Actors' Equity.

Hundreds of people filled Sotheby's showroom and competed with phone and Internet bidders to drive the prices far above pre-sale estimates.

The auction offered a glimpse into the life of an intensely private star who appears to have been a bit of a pack rat as well.

A seascape painting by Sir William Nicholson, "Mending the Nets," sold for $102,000, and a silver cigarette box engraved with the signatures of the rest of the cast from the Broadway production of "The Philadelphia Story" sold for $57,000.

The buyers of the top lots were anonymous, but Sotheby's said that romance novelist Danielle Steel, bidding by phone, bought three of Hepburn's hats for $3,600.

Craig Bowley, who runs the box office at a Broadway theater, bid unsuccessfully on several items before scoring an early Victorian armchair for $3,200.

"We just renovated our apartment," he said. "We'll put it in a prominent place."

The prices include the auction house's commission of 20 percent of the first $100,000 and 12 percent of anything beyond that.