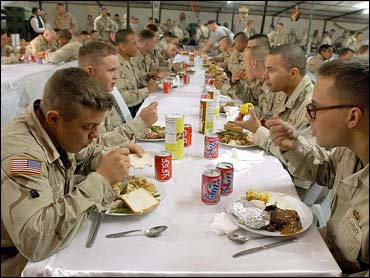 The Pentagon plans to withhold about $300 million in payments to Halliburton Co. because of possible overcharging for meals served to troops in Iraq and Kuwait, defense officials said Wednesday.

Beginning next month, the Defense Department will begin withholding 15 percent of the money that was to be paid to the company - whose former CEOs include Vice President Dick Cheney - as part of a multibillion-dollar contract to provide services such as food, housing, laundry and mail to U.S. troops in Iraq.

Halliburton spokeswoman Wendy Hall said the company disagreed with the decision and hoped to persuade the Pentagon to drop its plans. If the Defense Department does withhold the money, Halliburton will in turn withhold 15 percent of its payments to its subcontractors, Hall said.

The withholding won't affect Houston-based Halliburton's bottom line, Hall said. Company executives told Wall Street analysts last week the company was taking in about $1 billion a month from its operations in Iraq. The company has set aside $141 million to settle the overcharging allegations and already has repaid about $36 million.

Halliburton and its military services subsidiary, KBR, face a criminal investigation into alleged misdeeds in government work in Iraq and Kuwait. In this case, Pentagon auditors accuse KBR of overestimating the number of troops to be served meals, thus reaping millions in overcharges.

Halliburton has said any mistakes in estimating the number of troops came from having to operate in a war zone where the numbers changed quickly and unpredictably.

"It is imperative that these allegations of overcharges be investigated and the best interests of the government are protected," Zakheim wrote in the letter, which also was signed by Michael Wynne, the acting Pentagon contracting chief.

The possible overcharging for meals is just one of Halliburton's troubles with its work in Iraq and Kuwait. The work also includes a contract to rebuild the dilapidated oil industry in southern Iraq.

Halliburton's other problems include: