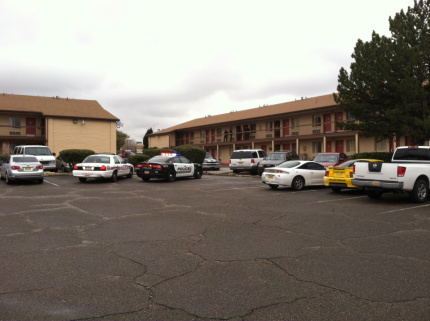 ALBUQUERQUE, N.M. - A 3-year-old boy found a handgun in his mother's purse and fired just one shot that wounded both his parents at an Albuquerque motel on Saturday, police said.

According to investigators, the toddler apparently reached for an iPod but found the loaded weapon. Police believe the shooting to be accidental.

"It's a very tricky situation when you're dealing with children, so that's why we need to talk to the adults and find out what happened," said Albuquerque police spokesman Simon Drobik, according to CBS affiliate KRQE.

The bullet first struck his father in the buttock and then hit the right shoulder of his mother, who is eight months pregnant, police said. His 2-year-old sister was present but unhurt.

Justin Reynolds told KOB-TV that he and his girlfriend, Monique Villescas, were getting ready to order pizza when the toddler fired the shot.

"It was like if I was to get up shake your hand and sat back down. That's how fast it happened," Reynolds said." All of a sudden we heard a gun go off and the next minute I realized my girlfriend was bleeding. Then, I sat down and realized I was shot, too."

Reynolds said he called 911 and grabbed some towels to try to stop her bleeding.

"I was more worried about my girlfriend than myself and anything else that was going on. And my son because I didn't know if he had shot himself or not," said Reynolds. "He was shocked and crying. It was traumatizing."

Police said in a statement that the father was treated and released, while the mother was hospitalized in stable condition.

"This case will be forwarded to the DA's office and pending charges of felony criminal negligence will be reviewed on both parents," Drobik said.

The Albuquerque Journal reports that the family was living in a room at the America's Best Value Inn where the shooting occurred.

Jonathan Hutson, a spokesman for the Washington-based Brady Campaign and Center to Prevent Gun Violence, said the shooting should serve as a reminder to all parents to keep guns locked away securely.