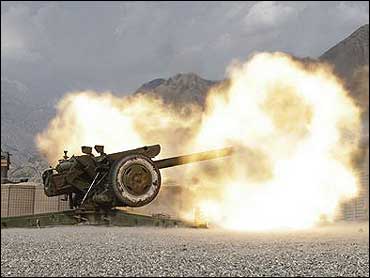 A NATO bomb missed its target by more than 1.5 miles and hit a house Tuesday, killing two Afghan civilians and wounding 10 at a time of rising tension between the Afghan government and international troops over the use of airstrikes.

NATO said its weapon malfunctioned Tuesday in the eastern Khost province. The bomb's target was a spot used by insurgents to fire rockets.

"An immediate investigation into the cause of the incident has been launched and further details will be forthcoming once established," the statement said.

Because of Afghanistan's mountainous terrain and few roads, U.S. and other foreign forces rely heavily on the use of airpower in their fight against Taliban and al Qaeda fighters. But the use of airstrikes in civilian areas have been blamed for a series of civilian deaths, which caused President Hamid Karzai to ask for a review of the use of U.S. and NATO air power.

The bodies of at least 10 children and many more adults covered in blankets and white shrouds appear in videos obtained by The Associated Press on Monday.

The two grainy videos, apparently taken by cell phones, showed bodies lying side-by-side on the mosque floor, covered by floral-patterned blankets and black-and-white checkered shawls. One young boy lay curled in a fetal position; others looked as though they were asleep. One child had half its head blown off.

It was impossible to verify conclusively that the videos showed the aftermath of the Azizabad attack, but the contents appeared to back claims by Afghan and U.N. officials that the U.S. operation killed far more civilians than the military has acknowledged.

Karzai said Tuesday that he was pleased that the investigation into the Azizabad incident had been reopened. He said Afghan authorities had received "messages of regrets and condolences from as high as the president of the United States."

"While we say 'no civilian casualties,' we reiterate ... that we are dedicated in the war against terrorism because it brings our people safety and security that we so much need," Karzai said.

Karzai has said that the Azizabad bombings have brought relations between the Afghan government and the U.S. to one of its lowest points since the ouster of the Islamic militia from power in 2001.

Shortly after the Azizabad attack, he ordered a review of whether the U.S. and NATO should be allowed to use airstrikes or carry out raids in villages. He also called for an updated "status of force" agreement between the Afghan government and foreign militaries. That review has not yet been completed.

In the eastern Paktika province, meanwhile, another airstrike hit a group of foreign fighters and killed 12 militants, including nine Chechen fighters, said Ruhulla Samon, the spokesman for the provincial governor.

There were no casualties among Afghan forces in either clash.

Afghan and Western officials have warned that higher numbers of foreign militants have joined the fight inside Afghanistan, which is seeing record levels of violence nearly seven years after a U.S.-led invasion drove the fundamentalist Taliban from power over its sheltering of the al Qaeda terrorist network.

More than 4,000 people have died in insurgency-related violence this year, according to an Associated Press tally of figures from Western and Afghan officials.