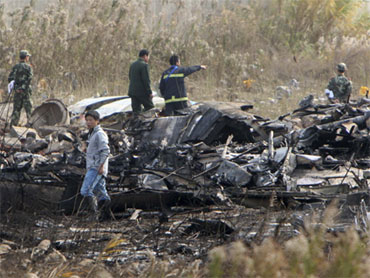 A Zimbabwe cargo plane crashed as it took off from Shanghai's main airport Saturday, killing three American crew members and injuring four other employees after it veered off the runway and burst into flames.

Three Americans on the seven-member crew died and a fourth American was injured, U.S. Embassy spokesman Richard Buangan told The Associated Press. He did not know the injured person's condition.

Shanghai television showed what it called a 61-year-old American co-pilot in a hospital bed, conscious and saying "Thank you" to staff and officials.

The TV report said the other crew were from Indonesia, Belgium and Zimbabwe.

The crash occurred just after 8 a.m. (0000 GMT), the official Xinhua News Agency said. The plane was headed to Bishkek, capital of Kyrgyzstan.

The aircraft was operated by Zimbabwe-based Avient Aviation, Xinhua said. Calls to the Zimbabwe Embassy in Beijing went unanswered Saturday.

More than 30 international flights were delayed Saturday morning, leaving about 4,000 travelers stranded on planes or in airport lounges, Xinhua said. CCTV said two runways at the airport were shut down.

Shanghai is China's largest city and its economic capital. The Pudong airport is located on the eastern edge of the city, by the East China Sea.