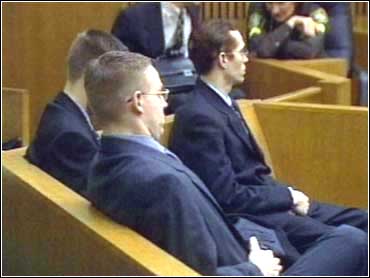 Three of the four young men charged in the date-rape-drug death of a 15-year-old girl were found guilty Tuesday of involuntary manslaughter.

Jurors in one of the nation's first trials resulting from a death linked to the date-rape drug GHB also found the three- Joshua Cole, 19, of Southgate, Daniel Brayman, 18, of Trenton and Nicholas Holtschlag, 18, of Wayne County's Brownstown Township - guilty of lesser poisoning charges.

A fourth defendant, Erick Limmer, 26, of Grosse Ile, was found guilty of one count each of being an accessory to manslaughter after the fact, poisoning, delivery of marijuana and possession of GHB, reports CBS News Correspondent Lauren Bishop.

The manslaughter conviction carries a sentence of up to 15 years in prison. The penalty for the poisoning convictions wasn't immediately clear.

Prosecutors alleged the men gave Samantha a soft drink secretly spiked with GHB, or gamma-hydroxybutyrate, during a Jan. 16, 1999, party at Limmer's Grosse Ile apartment. Samantha died the next day. Her best friend Melanie Sindone, now 16, also ingested the drug and was briefly in a coma, but survived.

"It's the right message sent by jurors: When you mix and mingle GHB, you will go to jail," said Samantha's mother, Judi Clark.

Cole's case was heard by a separate jury because authorities said he confessed. The Southgate resident's jury began deliberations March 7, and the jury for his three co-defendants began Friday.

GHB is a colorless and odorless drug that can make a victim unconscious within 20 minutes. Victims frequently have no memory of what happened and the drug is difficult to trace, often leaving the body within 24 hours.

It has been linked to at least 58 deaths since 1990 and more than 5,700 recorded overdoses, according to the Drug Enforcement Administration. There have been at least four GHB-related deaths in Michigan in addition to Samantha's.

In 1990, the FDA banned GHB for public sale, and a 1998 Michigan law made possessing the drug a felony.

President Clinton last month signed legislation toughening federal laws against possessing, making or distributing GHB. The bill is named for Samantha and a Texas teen-ager who also died after GHB was slipped into her soft drink.

Clark and Melanie hugged each other in the courtroom after the verdicts were read. Cole's mother cried. The four defendants did not show any emotion.

After the juries exited the courtroom, Clark went into a back room and did not immediately speak to reporters.

Juror Denise Newman later said, "We did see this as a party got out of control - I have four children and can imagine my daughter being in Samantha' s place."

Attorneys for Brayman and Holtschlag have argued their clients were unaware GHB ws present the night in question. Cole's attorney has said his client spiked the drinks with what he believed was only a harmless intoxicant supplied by Limmer.

Limmer has said he was gone or in his bedroom most of the night the girls were drugged.

Last week, Cole's attorney, John Courtright, repeatedly told jurors Samantha's death was a "tragic accident," though Brayman, Holtschlag and Limmer argued Cole solely should be blamed. Tuesday afternoon, Courtright said the decision shows the jury "found my client had no intention of harming these girls, no intention to take advantage of these girls in any way."

"Joshua Cole is the one who created this tragedy and this hell for everyone to go through," Limmer's attorney, Cecil St. Pierre, told jurors last week.

"There's no question this is a tragedy and police are trying to grab everyone who was there and try to tell you everyone was involved.''

Brayman's torney John Gates told jurors the case against his client was a product of innuendo, slander, half-truths and outright lies.

In arguing that blaming Cole was too convenient, assistant Wayne County prosecutor Doug Baker likened the other three defendants to the cartoonish monkeys who hear, see and do no evil. Or a Greek play involving a savior lowered onto the stage to save a desperate hero.

"And who rescues them every step of the way? Joshua Cole,'' Baker said.

Cole was found innocent of a third poisoning count. Prosecutors alleged he drugged a third girl who did not become ill.