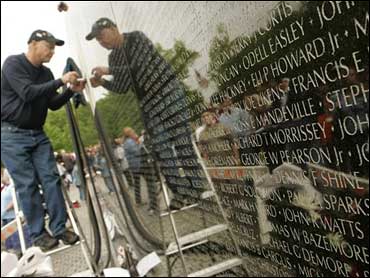 The name of Army Sgt. Richard M. Pruett is now etched into the glossy black granite of the Vietnam Veterans Memorial — nearly four decades after he was wounded during a combat mission in South Vietnam.

His wife, Ann, wiped away tears as Pruett's name was added to the memorial Thursday. "He would be so honored. It is the ultimate honor, I think, to be on the wall," she said.

Richard Pruett, who was from Sherman, Texas, died in 2005 from complications related to wounds received during the war, making him eligible for inclusion on the memorial on the National Mall.

Krywicki was killed in 1966 in Vietnam when a member of his unit accidentally discharged his rifle. The Navy initially declined to add Krywicki's name to the memorial because he died not in combat but in a "friendly fire" incident. The Navy reversed course following inquiries from his family.

Stiverson sustained fragmentation wounds in 1971 when his base camp came under fire in Vietnam. The Pentagon determined that his death in 2005 was directly related to those wounds.

The Defense Department decides which names are to be inscribed on the wall. Victims of Agent Orange and suicides resulting from post-traumatic stress disorder do not meet the Pentagon's guidelines for inclusion, according to the memorial's Web site.

Since the memorial was dedicated in 1982, a few names have been added each year, said Jan Scruggs, founder and president of the Vietnam Veterans Memorial Fund.

Engraving each new name, he said, is a painstaking and meticulous process. The stonecarvers take great care to get the new name to match the depth, within one-thousandth of an inch, of the names already on the wall.

The names of Americans killed or missing in Vietnam are listed on the wall by date of casualty. The new names are being added to panels of the wall that are closest to the dates that the men were wounded, in keeping with the vision of memorial designer Maya Lin.

Ann Pruett said her husband was wounded while on patrol in 1969. He had taken off his flak jacket to sit down near a tree on a hot, humid day. Someone, she said, tripped a wire that set off an explosive device and Pruett was seriously wounded.

"He had shrapnel everywhere," said his wife.

His lower intestines, she said, were destroyed. Despite his wounds, he went on to start a construction company and enjoy his grandchildren. He died in 2005 from intestinal complications related to the 1969 explosion.

Ann Pruett said her husband had always talked about bringing her to the wall. He had been to visit the memorial with his sisters, but not with his wife.

She finally made the trip on Thursday.

"I feel like in this case, he brought me to the wall," she said. "I just wish he could be with me."