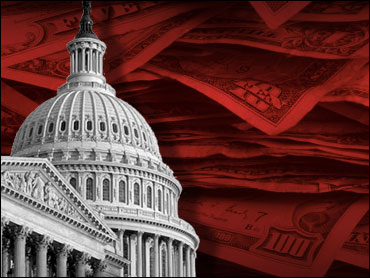 The federal government already has run up a record deficit of $485.2 billion in just the first three months of the current budget year, the Treasury Department said Tuesday.

The deficit is on track to surpass $1 trillion for all of fiscal 2009 and some economists believe it could go much higher.

The deficit for December totaled $83.6 billion, a sharp deterioration from a year ago when the government managed a surplus of $48.3 billion. Wall Street economists surveyed by Thomson Reuters expected a slightly lower deficit of $83 billion.

All the red ink is occurring because of the massive spending on the $700 billion financial rescue program and a prolonged recession which has depressed tax revenues.

The imbalance from October through December is the highest on record for a first quarter and surpasses the mark for a full budget year of $454.8 billion set last year.

The Congressional Budget Office last week projected that the deficit for this fiscal year will hit $1.2 trillion. But that projection does not include any of the costs from the economic stimulus program that President-elect Barack Obama is hoping Congress will pass in the next few weeks in an effort to keep the current recession from deepening.

The cost of Mr. Obama's two-year program is expected to be around $800 billion.

The red ink through December includes $247 billion that has been spent on the $700 billion financial rescue program that Congress passed on Oct. 3 to deal with the most serious financial crisis to hit the country since the 1930s.

Much of that money has been spent injecting fresh capital into banks in an effort to repair their balance sheets and encourage them to resume more normal lending. Part of the bailout funds also went to shore up insurance giant American International Group Inc. and the auto industry, with both General Motors Corp. and Chrysler LLC getting support.

The administration has committed the first half of the $700 billion rescue fund. On Monday, President George W. Bush, acting at the behest of Mr. Obama, asked Congress to release the second $350 billion.

Mr. Obama asked Democratic senators not to stand in the way of the additional $350 billion in bailout funds, calling the money essential to helping the troubled economy.

Mr. Obama made his pitch in a meeting in the Capitol, where he attended the Democratic senators' closed-door luncheon.

In an effort to deal with growing congressional unhappiness over how the program has been run, Mr. Obama has pledged to impose tighter controls on banks that receive the money to make sure they use the funds to increase lending, to devote greater resources to combatting mortgage foreclosures, and to help consumers and businesses obtain loans.

He also scrapped plans to offer businesses $3,000 tax credits for every job created after some Democrats complained the plan would be difficult to administer and ripe for abuse, reported the Washington Post.

The Treasury said in the first three months of this budget year, which began on Oct. 1, revenues totaled $547.4 billion, down by 9.7 percent from the year-ago period, mostly reflecting lower corporate tax collections because of the weak economy. Spending over that period totaled $1.03 trillion, an increase of 44.8 percent from a year ago.

Supporters of the bailout have argued that the government will get the bulk of the money back since it is being used to buy assets, mainly preferred stock in financial institutions. Once markets stabilize, the banks will buy their stock back from the government.

The deficit of $485.2 billion through December is more than four times the $108.8 billion in red ink recorded during the year-ago period.