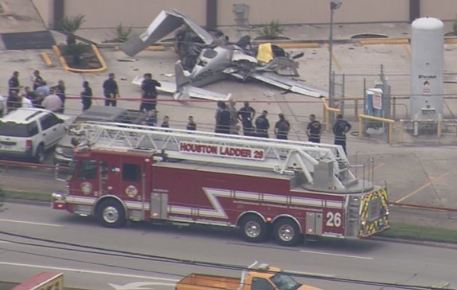 HOUSTON -- Fire officials say three people were killed after a small plane crashed into a car in a parking lot near a Houston airport.

Houston Fire Department spokesman Jay Evans says the plane crashed shortly after 1 p.m. Thursday into a car that was parked at a hardware store near Hobby Airport.

Fire Capt. Ruy Lozano says officials believe the three people killed in the accident were on the plane. No one was in the parked car that was hit by the plane.

The single-engine SR20 crashed in the parking lot of an Ace Hardware Store, CBS affiliate KHOU reported. It destroyed an employee's vehicle, but no one on the ground was hurt.

An employee inside the store told KHOU it sounded like a "loud boom."

In a recording from the Air Traffic Control tower just before the crash, a controller is heard telling the pilot, "Straighten up, straighten up," KHOU reported.

Lozano says he doesn't know if the plane had taken off or was trying to land at the airport.