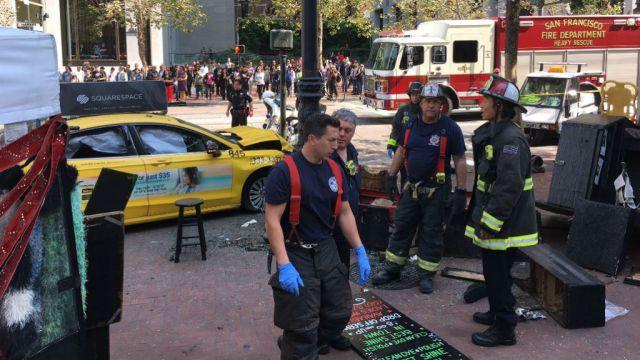 SAN FRANCISCO -- Authorities say three people are critically injured Tuesday after a taxi jumped a curb and plowed into an advertising kiosk and a shoeshine stand at a busy corner in downtown San Francisco.

San Francisco Police Officer Grace Gatpandan says the taxi driver and two people who were at the shoeshine stand were rushed to a hospital with life threatening injuries.

Gatpandan said the taxi was traveling west Tuesday afternoon when it jumped the curb on Market and Sutter Streets in San Francisco’s Financial District.

Officials initially said the taxi had crashed against a public toilet but later said it hit an advertising kiosk.

A large crowd was standing around the yellow cab that came to rest against a street lamp.

CBS San Francisco quoted a spokesman for Zuckerberg San Francisco General Hospital as saying among the three male victims – ages 40, 59 and 66 – one was in critical condition and the two others were still being evaluated.

Fire Department Lt. Jonathan Baxter says that when emergency personnel arrived at the scene the injured “were in different states of consciousness.”

Police are unsure what caused the accident and are talking to witnesses.