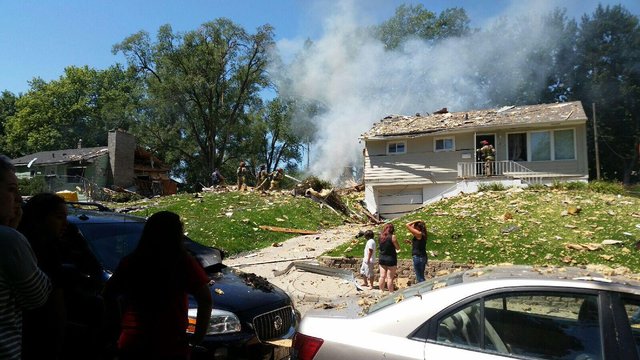 OMAHA, Nebraska -- One person died and at least two others were injured when an explosion leveled a house in Omaha.

Fire crews responded to a report of a house explosion in Benson, Nebraska on Monday afternoon, CBS affiliate KMTV reported.

The explosion occurred around 12:20 p.m.

Authorities didn't release the names of those hurt and injured.

Nearby homes were moved off their foundations, and McCaw says the damaged home was reduced to its foundation.

Neighbors told KMTV that they heard a loud boom and one mentioned they were woken up by it.

Viewers posted on KMTV's Facebook page saying that they heard it in other parts of Omaha.

The cause of the explosion is currently unclear, and is under investigation. Metropolitan Utilities District officials shut off the natural gas to the house, KMTV reported.

M.U.D. technicians surveyed the area and verified no natural gas leaks and that the natural gas facilities are safe, officials told KMTV.

M.U.D. officials say they are cooperating with the investigation.