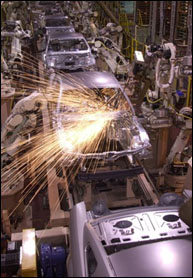 Three spectators were killed and at least eight injured when struck by debris that flew into the stands after a three-car crash in the VisionAire 500 Indy Racing League event Saturday night.

Spectators sitting in the area where the crash occurred said a tire and suspension parts flew into the fourth-turn grandstands at Lowe's Motor Speedway and struck the spectators.

Area hospitals reported treating at least eight people, including one child who was in critical condition.

Two people were flown by helicopter to Carolinas Medical Center in nearby Charlotte, spokeswoman Kirstin Bass said. She said a child was in critical condition late Saturday night and an adult was in serious condition.

She declined to elaborate on the injuries or identify the victims.

Three of the injured were transported by ambulance to Northeast Medical Center in Concord.

Spokeswoman Carol Lovin said Nathaniel Blosser, 19, of Hickory, and David Duncan, 27, of Newton, were released late Saturday night, and Chad Duncan, 22, of Conover, David's brother, was still being treated but was expected to be released Sunday.

The three people killed also were transported to Northeast.

As rescue workers were attending to the injured, the track canceled the race.

"This is a terrible thing ," said speedway president H.A. "Humpy" Wheeler, who went into the stands where the debris landed and tried to comfort some of the spectators. "It's very regrettable. It's something we'll live with for a very, very long time."

Ninety minutes after the crash, the nearly 50,000 spectators had filed out of the track and investigators were working at the accident scene, taking measurements and roping off the area.

In the 1.5-mile superspeedway's sprawling infield, about 200 drivers and crew members gathered for a prayer service.

"My teammates and I are just full of sorrow," 1998 Indianapolis 500 winner Eddie Cheever said. "Our thoughts and prayers are with the individuals and families. The decision to stop the race was the right one. We all leave Charlotte with extremely heavy hearts."

John Paul Jr. and Stan Wattles slammed hard into the fourth-turn retaining wall on lap 61 of the 208-lap event and went spinning down the front stretch, collecting the car of Scott Harrington.

Television replays could not show conclusively what kind of debris flew into the stands. But Joe Tiano, a Hickory, N.C., resident who was sitting about 150 feet away in a neighboring section of stands, said a wheel and suspension parts flew into the seats.

"It came up here like a rocket and then started bouncing around," Tiano said.

Authorities cleared the section of the stands and the race was red-flagged while emergency workers attended to the injured. Whilmedical personnel worked, track security employees stood around them holding up white sheets.

"Everybody who was taking pictures had their cameras taken away by the cops," Tiano said.

One of the injured spectators was sitting in the 15th row, and the other two appeared to be about 10 rows higher.

Within minutes of the crash, the three drivers were examined at the infield care center and released, and about 15 minutes later, Wheeler went on the public address system to tell fans the race was being canceled.

"We've never done anything like this before," Wheeler said. "But it seemed like the right thing to do in respect to those who lost their lives up there."

The incident was similar to an accident last July in which three spectators were killed by debris after a racing crash at Michigan International Speedway. The track later increased the height of its catch fences by 2½ feet, to 17 feet, in an effort to prevent a recurrence.

Charlotte's catch fences were raised to 15 feet in 1997 in preparation for the track getting its first IRL race. Charlotte has been holding NASCAR Winston Cup races since it opened in 1960.

Wheeler and IRL founder Tony George, who joined him at a news conference after the race was canceled, said they were unsure from which car the tire came. The cars of both Wattles and Paul were missing tires after the crash, but Wattles' impact occurred the closest to where the spectators were injured.

"Our hearts go out to everyone up in the stands," Wattles said after he was released from the infield care center.

They were the first spectator fatalities in the history of the track and the IRL, which was founded in 1996.

Charlotte allows spectators to sit in all rows of the track's seats for Winston Cup races, but for IRL races the speedway bans fans from sitting in the bottom seven rows closest to the racing surface.

"I think Charlotte's been one of the leaders in protecting and taking care of their spectators," said Leo Mehl, executive director of the IRL.

"A League of Their Own" players reuniting in N.Y.