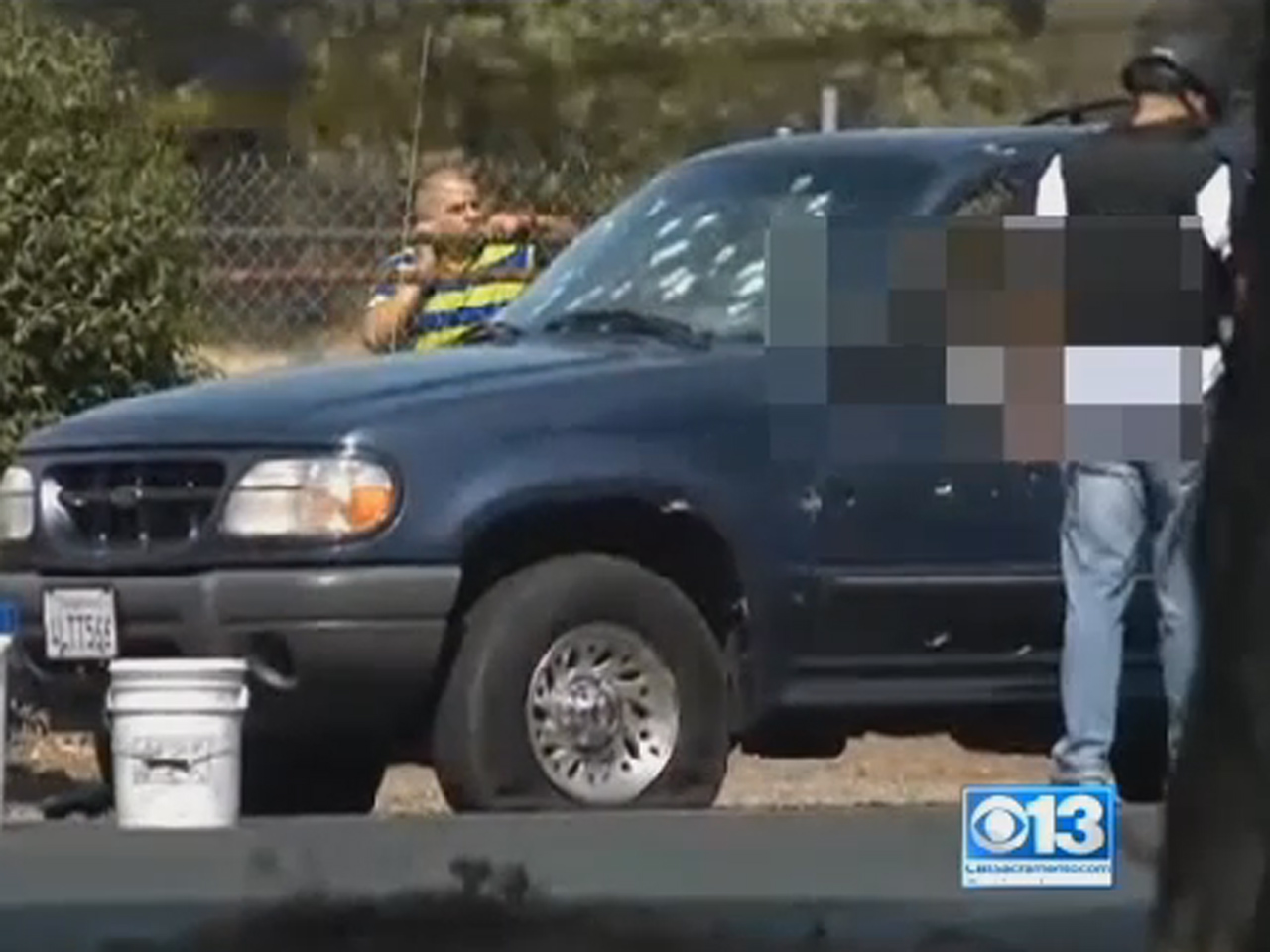 STOCKTON, Calif. -- Police want answers this morning from the only suspect to survive a bloody, chaotic shootout.

A group of bank robbers took hostages Wednesday, then led officers on a 45-minute chase.

This morning, two suspects and one hostage, who was a wife and mother, are dead.

Corresponent Sean Bennett reports it almost seemed as though war had broken out in Stockton, with bullets ricocheting off the getaway car as police exchanged gunfire with three suspected bank robbers armed with AK-47-style rifles.

Inside the SUV were also three women who had been taken hostage during the robbery. Two were employees, the third was a customer, whose 12-year-old daughter was waiting outside the bank when the robbery occurred.

The violence began mid-afternoon, when the three suspects brandishing guns allegedly stormed the Bank of the West in Stockton.

Police say the brazen bandits took the three women hostage, firing off their weapons and using them as human shields as they fled the scene in an employee's SUV.

Jose Maldonado, who told CBS News said he saw the robbers taking the women out of the bank, holding guns to the hostages' heads, and that the men didn't seem to care that there were police all around. "They were not afraid. They weren't going to take no for an answer.

Police set off in pursuit, a high-speed chase that lasted nearly an hour, winding through residential neighborhoods.

"It was such a chaotic ... fluid situation, really one of the most dangerous, tense situations that a police officer could go through," Jones said.

"There was a lot on the line and the officers responded appropriately," he said.

During the chase, the suspects threw two of the injured hostages - the bank employees -- from the vehicle.

Police shot out the SUV's, disabling the vehicle, but the suspects refused to surrender and exchanged a final volley of gunfire.

The police chief said the hostage appears to have been used by the suspects as a shield during the shootout.

The police swarmed the SUV and apprehended two suspects; a third was fatally shot. One of the suspects died later in a hospital.

Police said the other two suspects were taken to the hospital with gunshot wounds, and one of them later died.

Also discovered in the vehicle was Misty Holt-Sing, a bank customer, dead of gunshot wounds. She leaves behind a husband and daughter, KOVR reports.

"You don't wake up or go to your job thinking something like this is going to happen to you," said Misty's brother-in-law, Ajit Sing.

How to watch tonight's rare and "magical" celestial events
Thanks for reading CBS NEWS.
Create your free account or log in
for more features.
View CBS News In
CBS News App Open
Chrome Safari Continue
Be the first to know
Get browser notifications for breaking news, live events, and exclusive reporting.