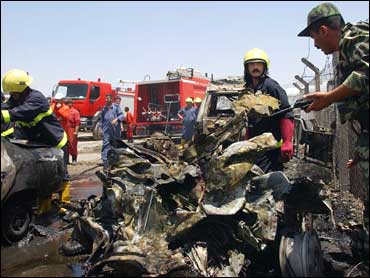 As officials in Baghdad Tuesday set an August date for another trial of former Iraqi President Saddam Hussein, an oil-rich city in northern Iraq found itself again targeted by insurgents, with a car bomb that went off at a gas station.

The blast came three days after a roadside bomb killed the chief of intelligence, also in Kirkuk, where at least 16 people have been killed this month in a series of explosions.

In the Iraqi capital Tuesday, the Iraqi High Tribunal announced that Saddam Hussein and six co-defendants will be put on trial Aug. 21 for a 1980s campaign in which an estimated 100,000 Kurds were killed in northern Iraq.

Charges in the case were announced in April and involve Saddam's alleged role in Operation Anfal - Arabic for "spoils of war" - which was launched to crush independence-minded Kurdish militias and clear the Kurdish population sensitive Iranian border area.

Saddam had accused Kurdish militias of ties to Iran. Thousands of Kurdish villages were razed and their inhabitants either killed or displaced.

A memo released by the tribunal in April said the Anfal campaign included "savage military attacks on civilians," including "the use of mustard gas and nerve agents ... to kill and maim rural villagers and to drive them out of their homes."

In the first tangible measure after the reconciliation plan was announced on Sunday, the council of ministers said government employees who had been detained and recently released will be reinstated to their jobs and their service should be considered uninterrupted in consideration of bonuses, promotion and retirement privileges.

The ministers said freed students will be allowed to return to school to take their final exams and will not be failed for the 2005-2006 school year despite time missed.

The measures were decided at the council's normal session on June 21 "to pave the way for the prime minister's reconciliation initiative," according to a statement released Monday.

It said the benefits could only be enjoyed once by former detainees and would not apply if somebody is arrested again.

The Justice Ministry, meanwhile, said 453 more detainees were released from U.S. detention centers across Iraq, part of al-Maliki's plans to free 2,500 by the end of the month as a goodwill gesture.

In another boost for the Shiite prime minister's reconciliation proposal, prominent Sunni cleric Ahmed Abdul Ghafour al-Samaraie offered the support of his Sunni Endowment, the state agency responsible for Sunni mosques and shrines.

But he called on the government to move quickly to fill in the details of the plan and said it should include the disbanding of armed militias, as well as the release of all prisoners who have not been convicted.

"We bless this initiative," he said. "We see a glimpse of hope out of this plan, but at the same time we are noticing that some people are pushing the armed groups to attack some areas in Baghdad, spreading terror and chaos in the city in order to make this plan a failure."

"Thus, the government is required to take decisive actions so that the citizens feel that the state is a real protector," he added. "We think that the first step to be taken regarding this plan is to disband armed militias because the government will not be able to impose the law on everybody with the presence of those militiamen that consider themselves above the law."

The seven insurgent organizations who approached the government are mostly made up of former members or backers of Saddam Hussein's government, military or security agencies, and were motivated in part by fear of undue Iranian influence in the country, lawmakers said.

If confirmed, their offer would mark an important potential shift and could stand as evidence of a growing divide between Iraq's homegrown Sunni insurgency and the more brutal and ideological fighters of al-Qaida in Iraq, who are believed to be mainly non-Iraqi Islamic militants.

Kurdish lawmaker Mahmoud Othman linked the offer to al-Maliki's national reconciliation plan, involving amnesty for opposition fighters except those who had killed Iraqis, were involved in terrorism or committed crimes against humanity. Al-Maliki's plan, disclosed Sunday, was thought to have denied amnesty to any insurgent who had killed American forces, though the wording was vague.

Shiite lawmaker Hassan al-Suneid, who first reported insurgent groups' gesture, said al-Maliki was considering a possible meeting with their leaders or contacts through intermediaries. Al-Suneid is a member of the political bureau of al-Maliki's Dawa Party.

The opening was confirmed by Othman, a close associate of President Jalal Talabani, who held face-to-face talks with seven insurgent organizations about two months ago. It was never clear which groups Talabani met with.

Al-Suneid gave the names of six of the seven organizations that approached the government Monday: the 1920 Revolution Brigades, the Mohammed Army, Abtal al-Iraq (Heroes of Iraq), the 9th of April Group, al-Fatah Brigades and the Brigades of the General Command of the Armed Forces.

"I expect that those groups are the same ones that have made contacts with President Talabani, and now they are widening the range of their contacts. Now they are more serious after the announcement of the (reconciliation) plan," al-Suneid told The Associated Press.

Othman was unable to name the groups or say whether they were the same ones Talibani had contacted. But he said they also sought talks with U.S. forces.

A meaningful truce with insurgents would make it much easier for the United States to withdraw troops from Iraq.