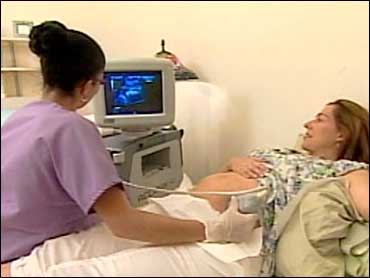 The next generation of high-tech medicine is now available to the public in stores around the country. Three-dimensional ultrasound is capable of providing pictures of a fetus in more detail than ever before.

But how safe is it? The Early Show medical correspondent Dr. Emily Senay explains.

Ultrasound is a technology widely used to generate images of a fetus during pregnancy to allow doctors to see and diagnose problems early on.

But now it's becoming more widely available outside the doctor's office, from a growing number of specialized boutiques offering expectant parents, who just can't wait for nine months, baby pictures taken inside the womb.

Parents like Silvia Campo. "I got very curious to find out if it was a girl or a boy and I couldn't wait to find out," she says. So I came up here and I saw that it's a her and it was fantastic."

The place is A Peek in the Pod, a studio in Manhattan that is using high-tech 3-D ultrasound to offer crystal-lear images with real time movement.

"I was blown away," Campo says when she first saw her baby's face, "I could not believe how soon such a little baby could look so human and have such distinct features."

A Peek in the Pod owner, Rocky McClintock, notes, "The fun things are seeing the baby open it's eyes, wave its hands, suck its thumb, hiccup, yawn and moving like a real baby."

Although ultrasound is considered safe for medical use, many doctors are troubled by its use for entertainment purposes.

Dr. Frank Chervenak of New York Presbyterian Weill-Cornell Medical Center says, "To our knowledge, ultrasound is safe, but we should not use it unless there's a medical indication. There may be unknown risk to ultrasound that would not justify its frivolous use."

Others argue that these early images have benefits beyond satisfying a parent's curiosity.

McClintock says, "I really believe that pregnant women should have a choice to be in a safe non-clinical environment that they can come and experience their baby, bring their families in and start the bonding process."

Campo agrees noting, "One always wonders how will the baby look and all of a sudden you have a concrete image of what that baby will look like and it helps with the bonding process, absolutely."

These ultrasound imaging studios are popping up all over the place these days. Many self-regulate the number of visits they allow and many say they require a doctor's approval beforehand. One thing is for certain: the best person to tell you when and why to get an ultrasound is your own doctor.

Though most doctors believe that ultrasound is safe, long-term studies have not been done on the effects of sound waves on a fetus. Many doctors are also concerned that expectant mothers will either get a false sense of security or become unnecessarily alarmed without proper advice and supervision from a doctor.