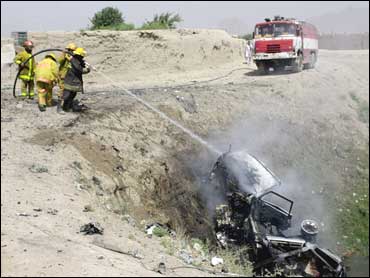 A suicide car bomber rammed into a government convoy in southern Afghanistan on Thursday, killing three people on the street and wounding the information minister, the governor said.

Kandahar Gov. Asadullah Khalid said the suicide blast killed three civilians on the street and slightly wounded Information and Culture Minister Abdul Karim Khurram and his chief deputy in Kandahar province. Both men were riding in one of the armored vehicles, Khalid said.

Khalid sometimes rides in the convoy struck by the suicide bomber. He said the apparent assassination attempt would not affect how he does his job.

"I will carry out my responsibilities and take care of Kandahar city," he told reporters.

The Taliban claimed responsibility for the two earlier attacks.

About 15 minutes later, a second blast hit police inspecting the wreckage, killing three and wounding four, Alizai said. A police officer at the blast site earlier had said 10 police died in the blasts.

After the second blast went off in Kandahar, bloodied police officers shouted and carried away bodies in the chaos, according to an Associated Press reporter at the site.

Kandahar has seen such double-attacks before — a tactic often used by insurgents in Iraq — but they are still comparatively rare in Afghanistan.

Qari Yousef Ahmadi, a purported Taliban spokesman, said the attack was planned to target police responding to the blast.

"First we set off a remote control explosion on a police vehicle, then we were waiting for the police to arrive on the scene, then we did a second blast," Ahmadi said by satellite phone from an undisclosed location.

The blasts came less than a week after Taliban field commander Mullah Dadullah was killed during a U.S.-led operation in Helmand province.

The Taliban have warned of "bad consequences" if the government didn't hand over Dadullah's body to his relatives. Khalid has said that Dadullah was buried at a secret location near Kandahar.

The insurgents fired a rocket at the NATO vehicle and engaged in a gun battle.

Sangin district police chief Ghulam Wali said the joint NATO-Afghan forces were patrolling on foot, and he believed only the driver was in the NATO vehicle when it was hit. The gun battle continued Thursday evening.

NATO's International Security Assistance Force confirmed that there was an incident with casualties in Helmand province but did not immediately have further details.

Wali said the attack was possibly related to a drug trafficker living nearby. "This incident happened near the home of an opium smuggler in Sangin district who has ties with the Taliban," he said.

About 1,800 people have been killed in insurgency-related violence this year, according to an AP count based on U.S., NATO and Afghan officials.

In the usually quiet north, where militant violence is rare, a roadside bomb hit the car of the Badakhshan provincial police chief as he was going to work, killing one of his bodyguards and wounding the chief and three other guards, said deputy governor Sham-sul Rahman.