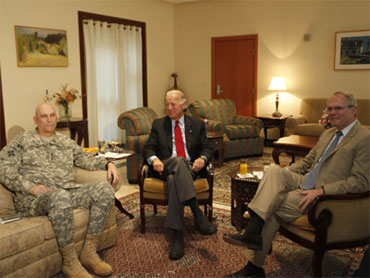 The rockets hit in the Green Zone on Tuesday evening, killing two Iraqi civilians, soon after Biden had retired for the night following meetings with American officials on the first day of his visit to Iraq.

A joint rapid-reaction force raided the launching site and, after coming under small arms fire, arrested three Iraqis along with three rocket rails believed to have been used to fire the shells, the U.S. military said in a statement.

The military did not identify the men.

An Iraqi military officer, speaking on condition of anonymity because he was not authorized to speak to the press, said the three men were picked up on the outskirts of the main Shiite district of Sadr City and are believed to be Shiite militants who broke away from anti-American cleric Muqtada al-Sadr's now dissolved Mahdi Army.

Shiite militants in the past have frequently fired rockets and mortars at the Green Zone, a district along the Tigris River where Iraqi government offices and the U.S. Embassy are located.

However, a Sunni insurgent group, the Mujahideen Army, also claimed responsibility for the attack in a statement Wednesday on Islamic militant Web sites, saying the rocket-fire was "a reception for Biden, the head of infidelity." The authenticity of the claim could not be confirmed.

The U.S. military said three 107mm rockets impacted around the Green Zone in Tuesday's attacks, while Iraqi police say a fourth rocket fell short and hit a residential building, killing two and injuring five others. The shells were initially identified as mortars on Tuesday.

On Wednesday, Biden was meeting with a broad spectrum of Iraqi officials in Baghdad, trying to help smooth political differences as the American military moves ahead with plans to pull troops out of the country.

The American vice president was also meeting with Prime Minister Nouri al-Maliki, a Shiite, and Sunni leaders including Vice President Tariq al-Hashemi ahead of meetings with Kurdish officials on Thursday.

Over his three-day visit, Biden's main focus was expected to be plans for January elections and the ongoing violence in Iraq's north. As the number of bombings and other attacks declines elsewhere in Iraq, the north remains a battleground between Sunni Arab extremists and Iraqi and U.S. forces. Kurdish-Arab tension there also frequently flares into violence.

"The whole purpose is to see how we can be helpful, if we can, in helping them resolve the outstanding political issues they have to resolve internally, so that when the (security agreement) is fully implemented we leave a stable Iraq," he told reporters late Tuesday after meeting with Gen. Ray Odierno, the top U.S. commander in Iraq, and U.S. Ambassador Christopher Hill.

Biden made his last visit to the country on July 4 to spend U.S. Independence Day with the troops. During that trip he also met with his son, Beau, who is an Army captain serving in Iraq.