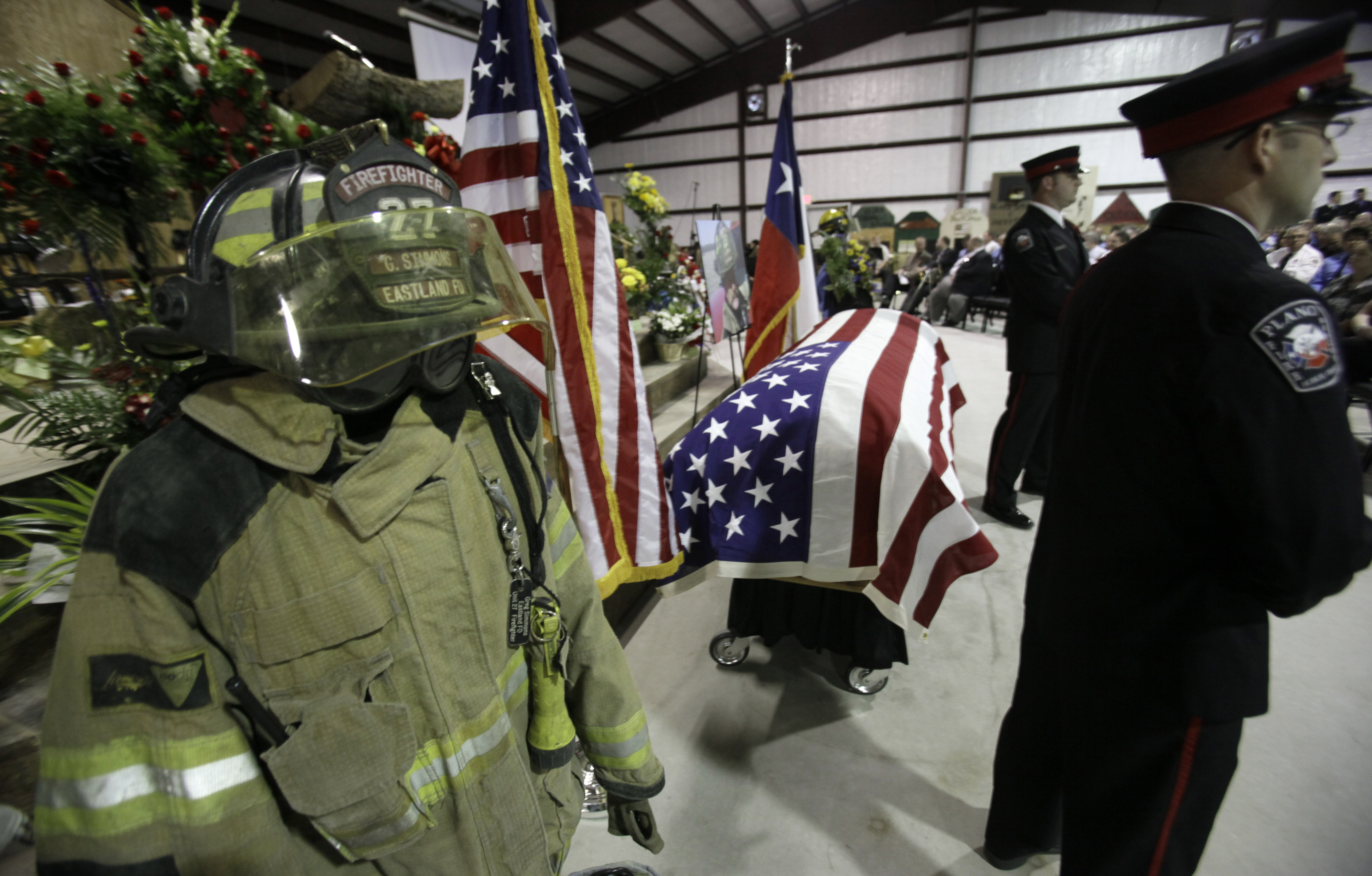 DALLAS - Federal firefighters and officials from several U.S. agencies joined the fight against a massive wildfire burning 70 miles west of Fort Worth on Wednesday, the same day a Texas firefighter died from injuries suffered while battling a blaze earlier this month.

The fire at Possum Kingdom Lake is among several that have scorched about 1 million acres across bone-dry Texas in the past two weeks. The federal team joined local personnel to help fight a blaze that has burned nearly 150,000 acres and destroyed about 50 homes, said Haven Cook, a spokeswoman for the Southern Area Incident Management Team.

It's the second time a federal management group has been assembled in Texas to help battle the blazes that have been burning across the state for weeks.

West Texas usually receives about eight inches of rain in a six-month stretch. This year it's received less than an inch. There are now at least 22 major fires ravaging the Texas heartland. There are 1,800 firefighters battling it from 34 different states but still no end in sight, reports CBS News correspondent Seth Doane.

A spokesman for University Medical Center in Lubbock said Elias Jacquez of Cactus, Texas, died Wednesday morning, 11 days after he was critically injured fighting a fire about 40 miles north of Amarillo.

Jacquez, 49, died the same day mourners gathered for the funeral of Gregory M. Simmons of Eastland, who died Friday fighting a fire in his home town 130 miles west of Dallas.

Simmons, 50, was remembered as a devoted husband and father who always helped out his fellow firefighters. After the emotional service at Leon River Cowboy Church in Olden, his flag-draped coffin was placed on top of a fire truck as more than 200 firefighters saluted.

Texas Forest Service spokesman Marq Webb said weather conditions Wednesday allowed firefighters to make "great progress" in building containment lines because the wind was down and humidity was up. He said the next couple of days could be crucial because they too are expected to offer similar conditions before hot and dry weather reappears.

"We're going to have a two- or three-day reprieve and then things start ramping up again," Webb said.

Webb said Wednesday's efforts to fight the fires using aircraft was less intense than Tuesday, when planes and helicopters dumped nearly 600,000 gallons of water and fire retardant across the state.

"The humidity will help with the fuel, but we really need some rainfall," Byrd said. "We expect rain in the next few days, but we don't know if it'll get on the fires or not."

Personnel from more than a half-dozen federal agencies — including the Forest Service, the National Park Service and the Bureau of Land Management — have been working to deal with fires in West Texas covering portions of 36 counties for more than a week, said Bridget Litten, a spokeswoman for that team.

"More of a federal effort is coming into the state now because of the severity of the fires and the number," she said.

Litten said rising humidity and cooler temperatures, along with five drops of fire retardant from a converted DC-10 jetliner, have helped the team in West Texas make progress.

The fire retardant, a mixture of chemicals and water, was dropped Tuesday on the fire in Coke and Tom Green counties, about 250 miles west of Dallas, and it allowed officials to lift an evacuation order Wednesday, she said. That fire covers 158,867 acres.

Litten said firefighters have had trouble containing one corner of the largest West Texas fire, burning over more than 200,000 acres in Jeff Davis and Presidio counties, but hoped Wednesday to institute a plan that would stop it by letting it burn to a road.

"The plan is to use the road system more as a fire break," she said.

More than 340 people, including firefighters from local departments and federal agencies and troops from the Texas Army National Guard, have been deployed to deal with the Possum Kingdom fire, which started Thursday and spread into two other counties.