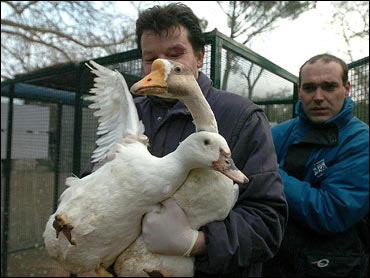 A second case of the deadly H5N1 bird flu virus has been confirmed in a wild duck in France, Agriculture Ministry officials said Thursday.

The duck was found dead on Feb. 19 in the Ain region. The discovery followed a first case of bird flu found a week ago in another duck found dead in the same region, in southeastern France.

Special surveillance measures are being put in place around Bouvent, according to the Agriculture Ministry, which plans to check vehicles to ensure that no poultry leaves the region.

France is Europe's largest poultry producer. Last week, the government ordered all domestic birds indoors or, in a few regions, vaccinated in a bid to halt bird flu. Violators could face fines of up to euro750 (US$895).

With poultry sales down by 25 to 30 percent since the first case was reported last week, both French President Jacques Chirac and Prime Minister Dominque de Villepin are doing what they can to boost consumer confidence.

"I order you [to] remind our compatriots that bird flu doesn't affect poultry farms and that there is no danger in consuming poultry and eggs," said Chirac, in a meeting with government ministers.

De Villepin, for his part, appeared on television - eating chicken and cradling a chick in his arms while visited the region of France where the dead ducks were found.

Bird flu has devastated poultry stocks and killed at least 92 people since 2003, according to the World Health Organization. Although most human cases of the disease have been linked to contact with infected birds, experts fear the virus may mutate into a form easily transmitted between humans.

EU health ministers are scheduled to hold talks Friday in Vienna with U.N. experts on the virus.