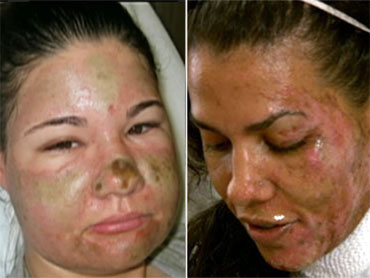 Bethany Storro stood in front of the cameras and told the world that on August 30, a woman threw a cup of acid at her in Vancouver, Wash., severely burning her face.

Storro said, "It was the most painful thing."

But the story became even more painful just four days later. In what may be a copycat crime, 41-year-old Derri Velarde, a mother of five, was getting out of her car at her Mesa, Ariz., home when a woman threw a glass of acid at her. She told "The Early Show" about her experience in an exclusive interview last week.

Velarde was left with severe burns on her face, neck, and back.

CBS News correspondent Ben Tracy reports it seemed like two vicious attacks, but now, Storro says she made her story up, telling police Thursday that she did it to herself.

Chief Clifford Cook, of the Vancouver Police Department, told reporters, "Miss Storro admitted that her injuries were self-inflicted. The attack itself did not occur as she had previously reported."

As for Velarde, she says she didn't think a hoax could be possible.

On "The Early Show" Friday, she told Hill, "I thought, 'Nah, that's just got to be some, you know, rumor out there or something.' I just thought I can't imagine doing this to themselves. It was just so upsetting. I literally got physically ill when I heard that and I thought it was a possibility."

Velarde said she had planned to reach out to Storro because they both had supposedly been through the same thing.

Now, Velarde says she doesn't want to talk to her.

She explained, "In the beginning, I was sitting in my hospital bed when I heard about her having previously had this happen to her so I felt like, you know, there's a connection there. And someone asked me did I feel betrayed, and that's not the right word. Possibly, if I had met her and befriended her and connected on that level, then probably felt betrayed more. I would say deceived, maybe a little, you know, like everyone else kind of feeling like, wow, this is unbelievable."

Police say during their investigation, Storro's story wasn't adding up, so they searched her home and re-interviewed her Thursday. The 28-year-old then told them the truth.

Why would she do this to herself?

Dr. David Swanson, a psychologist, said, "Really, what you're seeing for somebody like this is just a big hole in this life, and a strong desperate need for attention and willingness to go to an extent to get it."

Police say they have no explanation for Storro's hoax, but say she is sorry.

Commander Marla Schuman, of the Vancouver Police Department, said, "She is extremely upset. She's very remorseful. In many ways this just got bigger than what she expected."

Schuman said on "The Early Show" Friday the detective who interviewed Storro knows why Storro doused herself with acid, but said they aren't discussing that now because of possible charges.

Schuman said, "There are probably pending charges, based on the actions of Bethany that prevent us from doing that. So, is there a motive? I'm sure there is. And one can only wonder what her state of mind is."

Schuman said there were issues with Storro's story from the beginning.

Schuman said, "Her story had a lot of holes and red flags and, as we developed more and more information, it was very clear that this was probably a self-inflicted act and that we actually executed a search warrant at her home yesterday morning and retrieved several pieces of evidence. At the conclusion of that, she spoke with the detectives and eventually owned up to the fact this was actually something she had done herself."

Schuman said no acid was found in Storro's home.

Storro could face a range of charges.

Schuman said, "The basic charge would be false reporting. It could go, depending on whether she accessed any of the funds from the fund-raisers, any of the financial aspects of this, could go all the way up to felony charges and fraud."

Hill added the police department is trying to get some of the money back that was donated to Storro.

Schuman said Storro's family doesn't appear to have known anything about the self-inflicted wounds.

"At this point, they're very concerned for Bethany and they appear very devastated," Schuman said.

An attacker in Velarde's case has still not been found.

Velarde said on "The Early Show," "I don't recall her. We're still working on who she is and the connection obviously behind who did this."

"I'm really surprised as far as how quickly the burns continue to get better every day," she told Hill. "(I'm) still a little uncomfortable. You know, I'm not on any pain meds anymore and dealing with that but doing good."