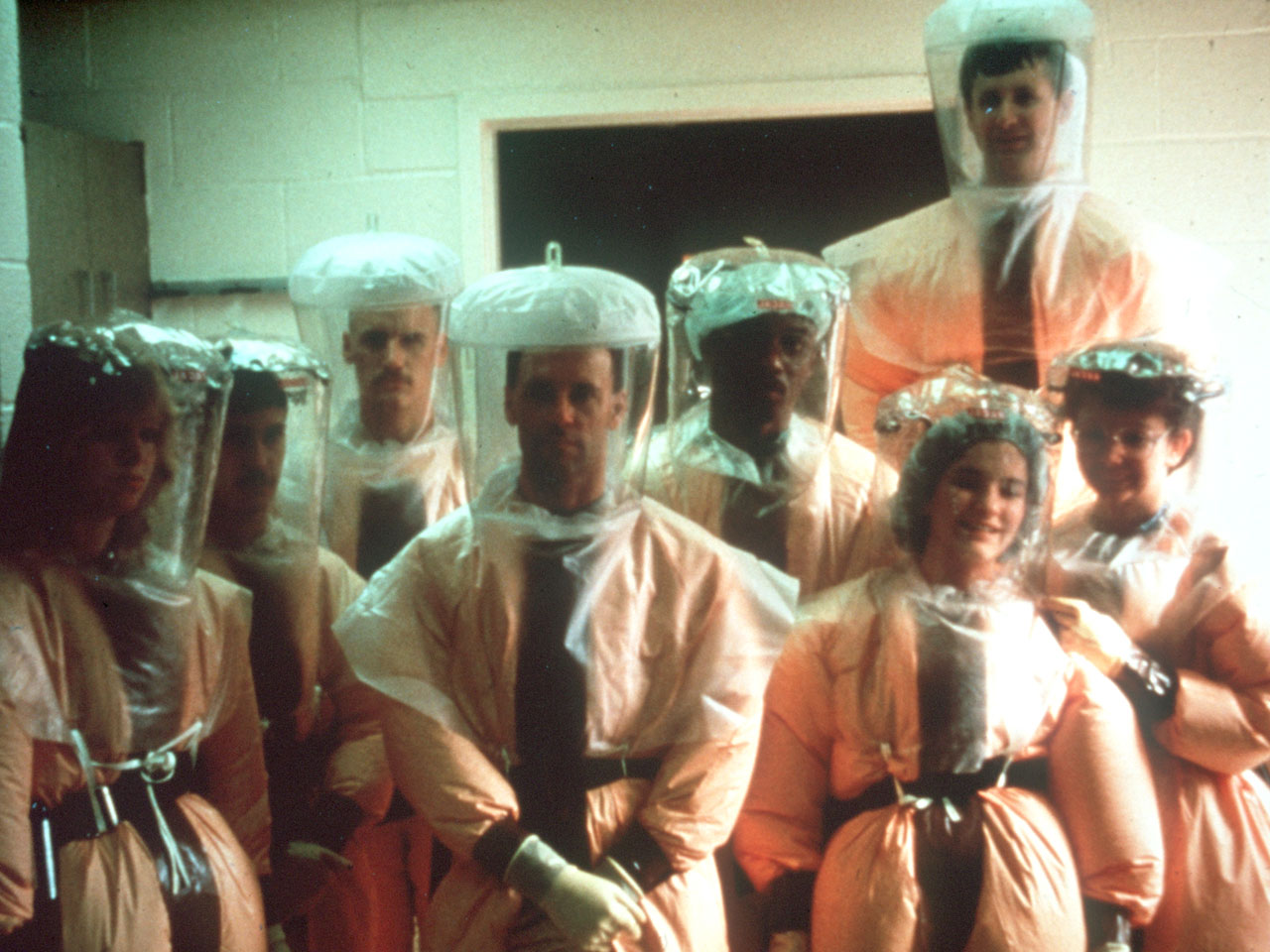 RESTON, Va. - It had all the makings of a public-health horror story: an outbreak of a wildly deadly virus on the doorstep of the nation's capital, with dozens of lab monkeys dead, multiple people testing positive, and no precedent in this country on how to contain it.

Americans' introduction to the Ebola virus came 25 years ago in an office park near Washington Dulles International Airport, a covert crisis that captivated the public only years later when it formed the basis of a bestselling book.

Initially thought to be the same hyper-deadly strain as the current Ebola outbreak that has killed hundreds in Africa, the previously unknown Reston variant turned out to be nonlethal to humans. But the story of what might have been illustrates how far U.S. scientists have come in their understanding of a virus whose very name strikes fear, even in a country where no one has fatally contracted it.

Gerald Jaax, one of the leaders of a team of Army scientists that responded to the 1989 outbreak in Reston, Virginia, closely watched the meticulously planned transfers this month of two American aid workers from Liberia to a specialized facility in Atlanta, the first Ebola patients ever brought to the U.S. Jaax recalled his days urgently trying to corral the country's first known outbreak.

In the fall of 1989, dozens of macaques imported from the Philippines suddenly died at Hazelton Research Products' primate quarantine unit in Reston, where animals were kept and later sold for lab testing. Company officials contacted the U.S. Army Medical Research Institute of Infectious Diseases at Fort Detrick, Maryland - Jaax's unit - concerned they might be dealing with an outbreak of hemorrhagic fever among the monkeys.

Initial testing revealed something much worse: Ebola, specifically the Zaire strain, which had a 90 percent fatality rate in humans. Four workers at the quarantine facility tested positive for exposure to the virus.

Amazingly, they never even got sick.

Researchers eventually realized they were dealing with a different strain, one now known as Ebola-Reston. Though its appearance under a microscope is similar to the Zaire strain, Ebola-Reston is the only one of the five forms of Ebola not harmful to humans.

But Jaax and his unit, including his wife Nancy , also a scientist, did not know that while at the monkey house. They just knew they had to clean it out, and do it while keeping a relatively low profile that wouldn't scare the neighbors.

"You could walk in and smell monkey everywhere," said Dr. C.J. Peters, who oversaw the Army's response to the outbreak. "There was a little shopping center nearby. ... There was plenty of opportunity for trouble."

While the Army scientists had strong protocols in place for studying viruses safely in a lab, they were not well prepared to stabilize and contain an outbreak in a private facility. At the time, Jaax said, nobody - including the U.S. Centers for Disease Control - had that kind of experience. In the Reston incident, the CDC took the lead in managing the human-health aspect of the response, while the Army dealt with the monkeys.

Back in 1989, there was concern that Ebola could spread through the air, said Peters, now a professor with University of Texas Medical Branch in Galveston. Indeed, researchers concluded there must have been some sort of aerosol spread of the virus within the monkey house, Jaax said.

The Reston animals had to be euthanized from a safe distance - "monkeys are aerosol-producing machines," Jaax said. In his 1995 book "The Hot Zone," Richard Preston described how Jaax modified a mop handle so it could be used to pin a monkey in its cage where it could safely be injected and eventually euthanized. Later, to disinfect the air, the team cooked formaldehyde crystals on electric frying pans.

Ebola is no longer thought to be an airborne virus; scientists say the disease can only be spread through direct contact with bodily fluids.

The Reston crisis also elevated Ebola into the public consciousness, albeit not immediately. In an era when the country was preoccupied with the AIDS epidemic, which hit 100,000 cases in the U.S. that year, the Army and CDC scientists carried out their tasks in relative obscurity.

It was only after "The Hot Zone" became a best-seller and focused attention on the public-health battle to confront emerging disease outbreaks that the Reston event became well known and Ebola became a household word.

"The big difference between now and 1989 is that nobody else knew what Ebola was," said Jaax, now an associate vice president at Kansas State University.

One of the most important legacies of Reston, Jaax said, was that none of the dozens who worked to contain the outbreak was exposed to the virus. The plans developed on the fly to keep the responders safe worked, he said, and provided a good blueprint for the protocols used to bring back the American aid workers earlier this month.

Dr. Amesh Adalja, senior associate at the UPMC Center for Health Security in Baltimore and an infectious disease physician, said the Reston responders' incorrect belief that they were dealing with a virus that was deadly to humans provided the ideal trial run for handling such an outbreak.

"It's like you're performing with a net underneath you, but you don't know it's a drill," Adalja said.

Ebola-Reston returned to the U.S. in 1996 in monkeys in Texas that had been imported from the Philippines. The Philippines has seen three outbreaks since the strain was identified, affecting primates, pigs and nine people. The workers who handled the animals developed antibodies, but did not get sick.

Hazelton abandoned the Reston facility in 1990, and the company was later swallowed up by a competitor. The monkey house was torn down a few years later. The new building there hosts several small offices and a day-care center.

Some of the office park workers are aware of the site's history; many are not.

Back in 1989, Vicky Wingert worked at the local homeowners' association, in offices across the street from the monkey house. She said nobody had any idea there was a problem until people showed up in hazmat suits. Even then, very little information trickled out, she said.

"At the time, it wasn't a big deal. Looking back, it probably should have been," she said.