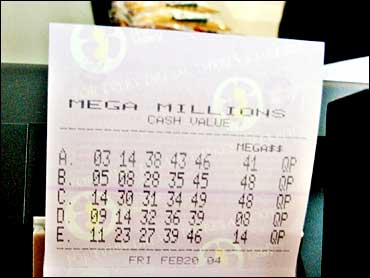 
Tickets sold by the hundreds of thousands for the record-setting Mega Millions jackpot as would-be millionaires around the country bought chances to win a $230 million jackpot — the largest in that lottery's history.

The 11-state jackpot led to higher ticket sales, despite the bleak odds of winning Friday — one in 135,145,920, according to the Mega Millions Web site.

If there is no winner Friday, the next jackpot is estimated to be $290 million.

By midafternoon Friday, ticket sales in New Jersey had reached 500,000 per hour, said Virginia Bauer, executive director of the state lottery. About $50 million worth of $1 tickets had been sold in New Jersey on Friday, Bauer said.

Lorine Clark of Hillside, Ill., bought tickets for herself and several co-workers Friday afternoon. Clark, who won $500 playing the lottery about 10 years ago, said she believes her chances for the jackpot are good.

"Of course I'm going to win. You have to think that way," she said. "If you believe it, hopefully it will come true."

In Georgia, more than $1 million in Mega Millions tickets were sold Friday before noon, said J.B. Landroche, spokesman for the Georgia Lottery.

In Ohio, 12,722 tickets were being sold each minute, said Mardele Cohen, spokeswoman for the Ohio Lottery.

The record drawing at 11 p.m. Friday was moved from Atlanta to New York City's Times Square.