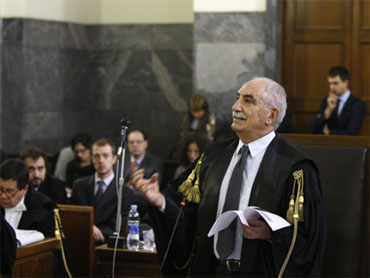 An Italian judge on Wednesday convicted 23 Americans of the 2003 kidnapping of an Egyptian cleric on a Milan street, in a landmark case involving the CIA's extraordinary rendition program in the war on terrorism.

The Americans, all but one identified by prosecutors as CIA agents, were tried in absentia. Their lawyers entered innocent pleas on their client's behalf. They are considered fugitives from Italian justice.

"This is largely symbolic because the Americans never showed up and it's unlikely our government is somehow going to hand them over now. But the symbolism, especially in the Arab world, will be and is very intense," CBS News chief legal analyst Andrew Cohen says.

In Washington, CIA spokesman George Little declined to comment on the convictions. He said, "The CIA has not commented on any of the allegations surrounding Abu Omar," the kidnapped man.

State Department spokesman Ian Kelly said Wednesday that the United States would not comment further because the judge had not issued a written opinion. But he said the Obama administration was "disappointed about the verdicts."

Magi said he was acquitting five Italian defendants because Italy withheld evidence, contending it was classified information. Two of the Italian defendants were convicted as accomplices to kidnapping and received three-year sentences, which despite the state secrecy imposed, indicates that Italian officials were complicit.

The verdict "sends a strong signal of the crimes committed by the CIA in Europe," said Joanne Mariner of Human Rights Watch. The crimes were "unacceptable and unjustified," said Mariner, who was in the courtroom for the verdict at the end of the nearly 3-year-long trial.

The Americans were accused of kidnapping Osama Moustafa Hassan Nasr, also known as Abu Omar, on Feb. 17, 2003, in Milan, then transferring him to U.S. bases in Italy and Germany. He was then moved to Egypt, where he says he was tortured. He was released after four years in prison without being charged.

The trial is the first by any government over the CIA's extraordinary rendition program, which transferred suspects overseas for interrogation. Human rights advocates charge that renditions were the CIA's way to outsource the torture of prisoners to countries where it is permitted.

The Milan proceedings have been a sore spot in relations between the United States and Italy. The CIA has declined to comment on the case, and Italy's government has denied involvement.

Among the Americans acquitted was Jeffrey Castelli, a former Rome CIA station chief, who prosecutors had alleged coordinated the abduction. The two other acquitted Americans were also assigned to the U.S. Embassy in the Italian capital and thus were covered by broad diplomatic immunity.