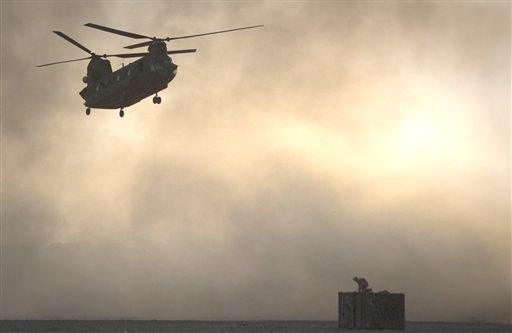 KABUL, Afghanistan -- A helicopter crash in Afghanistan's eastern Wardak province has killed 30 U.S. special operation troops and seven Afghan soldiers, the country's president said on Saturday. It was the highest number of casualties recorded in a single incident in the decade-long war.

More than 20 U.S. special operations forces killed, most of them Navy SEALs, according to CBS News correspondent David Martin in Washington.

Although Martin earlier reported that they were not members of SEAL Team 6, as some reports claimed, he is now reporting that It was Navy SEAL Team 6 but no members of bin Laden raid. The total of American dead appears to be 30, and we can say they came from the Navy, Air Force and Army, most of them Navy SEALs from Team 6.

The crew of five U.S. servicemen was also killed along with seven Afghan commandos, a civilian interpreter and a dog. Bodies are being evacuated from the crash site.

President Obama offered condolences to the dead. "Their deaths are a reminder of the extraordinary sacrifices made by the men and women of our military and their families, including all who have served in Afghanistan," said Obama in a statement. "We will draw inspiration from their lives, and continue the work of securing our country and standing up for the values that they embodied. We also mourn the Afghans who died alongside our troops in pursuit of a more peaceful and hopeful future for their country."

President Hamid Karzai sent his condolences to President Obama, according to a statement issued by his office.

"A NATO helicopter crashed last night in Wardak province," Karzai said in the statement, adding that 31 American special operations troops were killed. "President Karzai expressed his deep condolences because of this incident and expressed his sympathy to Barack Obama."

NATO confirmed the overnight crash and said the alliance was conducting a recovery operation at the site and investigating the cause of the crash, but did not release details or a casualty figure. The coalition said there "was enemy activity in the area."

"We are aware of an incident involving a helicopter in eastern Afghanistan," said U.S. Air Force Capt. Justin Brockhoff, a NATO spokesman. "We are in the process of accessing the facts."

Of the 3o dead Americans, as many as 25 Navy SEALs died, a senior military official told ABC News. 38 people were killed in all. The New York Times reports that 22 Navy SEALs had died.

CBS News correspondent Charles D'Agata said on "The Early Show on Saturday Morning" that, "Nighttime strikes are one of the most successful ways U.S. forces have to battle Taliban hideouts, but they're also one of the riskiest."

A spokesman for Wardak province, Shahidullah Shahid, said the helicopter crashed in the Sayd Abad district of Wardak province. The volatile region borders the province of Kabul where the Afghan capital is located and is known for its strong Taliban presence.

The provincial governor spokesman spokesman told CBS News that the joint operation targeting a suspected Taliban compound started shortly after midnight and the Chinook which was ferrying U.S. and Afghan special forces was hit and crashed in to the valley. The spokesman could not give any firm number of casualties as the area has been sealed off by U.S. forces but said that there have been large number of casualties.

Taliban spokesman Zabiullah Mujahid claimed the downed aircraft was a U.S. military helicopter and that the Taliban fighters had brought it down with a rocket attack.

In a written statement released Saturday, Mujahid said that NATO attacked a house in Sayd Abad where insurgent fighters were gathering Friday night.

Mujahid said the Taliban fired on NATO and downed the helicopter, killing all the crew. He said eight insurgents also died.

The New York Times cites a military official who requested anonymity as saying the helicopter was shot down by insurgents using a rocket-propelled grenade.

in June 2005, 16 American troops were killed when a U.S. helicopter crashed in eastern Kunar province after apparently being hit by a rocket-propelled grenade.

At NATO headquarters in Brussels, an official said it was a twin-rotor Chinook helicopter. The official, who spoke on condition of anonymity, said he was receiving his information from an Afghan officer in Kabul.