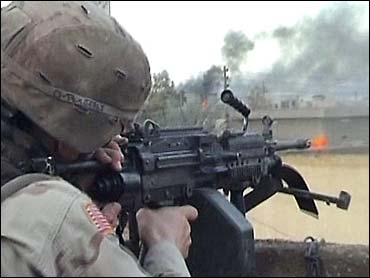 Nearly two dozen Americans have died in the fight to clear Fallujah of militants.

Lieutenant General Thomas Sattler, commanding general of the First Marine Expeditionary Force in Iraq, said the U.S. has "lost 22 coalition warriors who have made the ultimate sacrifice." he told reporters at a briefing that about 170 U.S. troops have been wounded. Five Iraqi soldiers have also been killed.

The announcement came as American forces went on the offensive against concentrations of militants in southern Fallujah who tried to break out of a security cordon. Guerrillas launched attacks in one of Iraq's major cities in what could be a bid to relieve pressure on their allies here.

Sattler also said 151 insurgents were being detained in Iraq and another 300 have surrendered at a mosque. The military estimates 600 insurgents have already been killed, about half the total of guerrillas thought to be in the city.

Sattler said U.S. and Iraqi forces now control about 80 percent of Fallujah. He said, however, that troops are searching "each and every house" for guerrillas, weapons and ammunition, "so there's much clearing to be done."