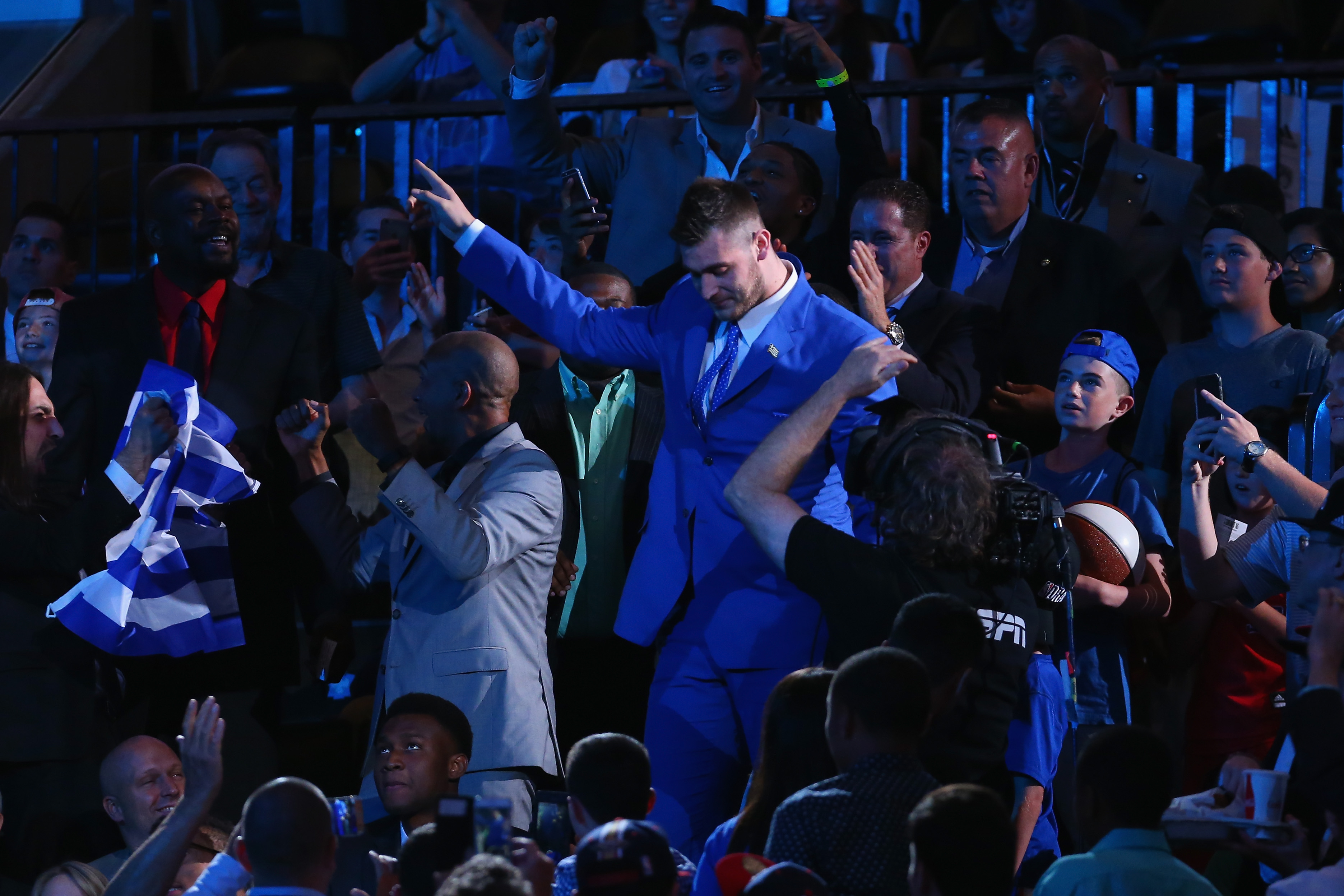 NEW YORK -- Ben Simmons went from Down Under to the top of the NBA draft, and a record number of international players followed.

The Philadelphia 76ers took the Australian with the No. 1 pick on Thursday night, making him the first of a record 14 international players chosen in the first round.

Simmons climbed on stage to the sound of cheers from a Philly-filled crowd hoping he could turn around the 76ers.

"Simmons was the clear No. 1 pick and should immediately make an impact in Philadelphia," writes CBSSports.com's Zach Harper.

Not long after the same crowd was largely quiet as the draft filled with unfamiliar names.

The picks included the first Austrian (Utah center Jakob Poeltl, No. 9 to Toronto), the highest Greek player ever drafted (Georgios Papagiannis, No. 13, Phoenix, rights dealt to Sacramento), two Croatians (Dragan Bender, No. 4 to Phoenix and Ante Zizic, No. 23, Boston), and two players from the Caribbean (Buddy Hield, Bahamas, No. 6 to New Orleans; and Skal Labissiere, Haiti, No. 28, picked by Phoenix but dealt to Sacramento).

The NBA said there were 26 international players selected, surpassing the record of 21 set in 2003.

Some of the international players won't come to the NBA next season, and perhaps never will.

Philadelphia grabbed the versatile 6-foot-10 forward from LSU who averaged 19.2 points, 11.8 rebounds and 4.8 assists to become the only player in Southeastern Conference history to finish in the top five in all three categories.

He comes with some questions - he made only one 3-pointer - but too much potential for the 76ers to pass up with their first No. 1 pick since taking Allen Iverson 20 years ago.

"It feels amazing, honestly," Simmons said. "I can't even - my legs were shaking when I was on stage."

Philadelphia fans who made the trip to Brooklyn's Barclays Center loudly cheered the selection in hopes that Simmons can help them move forward after three straight dismal seasons, including a 10-72 finish in 2015-16 that was just a game better than the worst ever in the 82-game schedule.

The last No. 1 pick from LSU was Shaquille O'Neal - who will be enshrined in the Naismith Memorial Basketball Hall of Fame along with Iverson in September.

The Los Angeles Lakers, picking second for the second consecutive year, took Duke's Brandon Ingram, who averaged 17.3 points as the ACC freshman of the year. He is the latest young player on a team that will begin life without the retired Kobe Bryant next season.

"I'm just going to be myself," Ingram said. "Whatever I can do to impact the game, whatever the coach needs me to do, I'm going to do it."

The Boston Celtics then began a busy night by picking California forward Jaylen Brown. Boston had eight picks in the two-round draft, starting with one it acquired from Brooklyn in 2013 in the deal that sent Kevin Garnett and Paul Pierce to the Nets.

Bender ended the run of three straight freshmen when the Suns selected the 7-1 forward who has been playing professionally for Maccabi Tel Aviv.

Milwaukee rounded out the top 10 with Thon Maker, originally from South Sudan, and Orlando followed with Domantas Sabonis, whose rights were quickly dealt to Oklahoma City along with Victor Oladipo and Ersan Ilyasova for forward Serge Ibaka.

The Minnesota Timberwolves used the No. 5 pick on Providence junior Kris Dunn, a two-time Defensive Player of the Year in the Big East who should fit nicely for new coach Tom Thibodeau.

A couple of the draft's best shooters went next, with New Orleans grabbing All-American Hield from Oklahoma, and Denver picking Kentucky freshman Jamal Murray at No. 7.

Michigan State's Denzel Valentine, the Associated Press Player of the Year, went 14th to Chicago to close the lottery. But that was a rare well-known name to the crowd at the time, as Papagiannis went 13th to Phoenix - climbing out of a crowd in the stands near the concourse level surrounded by Greek flags - with Spain's Juan Hernangomez going 15th to Denver, and Boston selecting Guerschon Yabusele of France at No. 16.

Even they seemed surprised to hear their names called by NBA Commissioner Adam Silver.

"Nobody was expecting," Yabusele said. "I see (the cameras) coming close to me, see my name. So I was really surprised to be in here, but I was so happy."

Labissiere, who played with Murray at Kentucky, barely sneaked into the first round after being considered a potential lottery pick.

"It was tough at first, but one thing about the league, one thing about all of us now, everything starts over for all of us," he said. "We all start over once we get to that level. I'm excited to get to work."