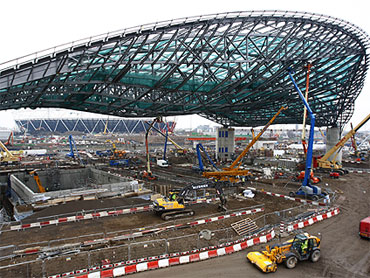 West told a London conference that the British capital will almost certainly be at a higher risk of a terrorist attack as an estimated 15,000 athletes, 14,000 coaches and officials and 20,000 media workers arrive for the games.

He said the country's threat level will likely rise to severe - the second-highest rating on a five-point scale - meaning an attack is considered highly likely.

"We are not complacent. We do not underestimate the scale of the Olympics challenge," West told the Royal United Services Institute think tank.

West, a former head of Britain's navy and defense intelligence staff, said the event would be "possibly the greatest security challenge the U.K. has faced since the Second World War."

Since 2001, Britain has invested heavily in anti-terrorism measures, increasing the size of domestic spy agency MI5 and raising the country's security budget to $6 billion.

The minister said a $1 billion fund has been set aside specifically for Olympic security.

West said work since the July 2005 transit network attacks in London, which killed 52 passengers and four suicide bombers, had "made the nation safer, but we are not safe - the threat is still there."

The London bombings came the day after the British capital was awarded the 2012 Olympics.

He pointed to the use of boats to launch attacks last November which killed 166 people in Mumbai, India, and methods deployed in Lahore, Pakistan, in March in a gun assault on the Sri Lankan national cricket team.

Britain has installed barriers to defend against car bombs at most sports stadiums, transport hubs and shopping malls, and provided new guidelines on protecting crowded spaces. During the Olympics, police speed boats will patrol the River Thames.

West said that, despite the likely threats, he is confident in plans to secure the London games. If medals were awarded for security planning, Britain "would be on top of the podium wearing a gold," he said.