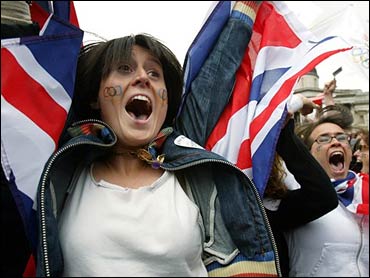 The British capital overcame its cross-Channel opponent 54-50 Wednesday on the fourth ballot of the International Olympic Committee vote, capping the most glamorous and hotly contested bid race in Olympic history.

IOC president Jacques Rogge opened a sealed envelope and declared the result in a live televised ceremony: "The International Olympic Committee has the honor of announcing that the Games of the 30th Olympiad in 2012 are awarded to the city of London."

"It might be about to pour rain once again in London, but they're having a very big party down in Trafalgar Square," MacVicar said.

"This is a momentous day for London. It's very good news," British Prime Minister Tony Blair told reporters at the venue for the G-8 summit in Scotland. But he only found out the result when the switchboard at his Downing Street office in London called him. "I couldn't bear to watch the final bit of it," Blair said. He said the games would prove to be a "legacy" for both Britain and the Olympic movement.

"I'm looking forward to what I'm sure will be a fantastic Olympic Games," said Prince William, speaking from New Zealand.

The results of the first three rounds of voting came as no surprise. Moscow, always considered the longshot, was eliminated first, with New York and Madrid soon following.

Paris had been the front-runner throughout the campaign, but London picked up momentum in the late stages with strong support from Blair.

Part of London's pitch was that it stepped in to help the Olympic movement by staging the games as Europe was still recovering from World War II.

The race had been considered too close to call as an unprecedented collection of world leaders and sports celebrities converged on Singapore to lobby for the bids.

Dejected Parisians who had gathered expectantly outside City Hall folded up French flags and streamed away from the square after the vote was announced.

French President Jacques Chirac, who had traveled to Singapore for the city's final presentation to the IOC, learned of the defeat aboard the plane carrying him to the G8 summit in Scotland.

Chirac congratulated London and wished "good luck and full success to the authorities and British people," his office said.

London also centered its bid on the massive urban renewal of a dilapidated area of East London. It's the fourth bid from Britain, which failed with Birmingham for the 1992 Olympics and Manchester for 1996 and 2000.

Blair, who spent two days lobbying in Singapore before leaving for the G-8 summit, spoke in a video message — half of which was delivered in French, one of the IOC's two official languages.

"My promise to you is we will be your very best partners," Blair said. "The entire government are united behind this bid. ... It is the nation's bid."

Going into the final day, much depended on the impact of the cities' final presentations and the vagaries of the round-by-round voting procedure.

New York made an emotional case for taking the games to the Big Apple for the first time, with a star-studded delegation — including Sen. Hillary Rodham Clinton and Muhammad Ali and a taped message from President George W. Bush — citing the city's long tradition of welcoming the world.

The presentation, however, failed to sway voters.

Speaking in English publicly for the first time, Putin appeared in a video message appealing to the IOC to make a "unique and historic" decision by giving the games to Moscow.

Moscow's bid has been undermined by security worries after terrorist attacks connected to the conflict in the Russian province of Chechnya. Chechen rebel warlord Shamil Basayev warned on Tuesday in a statement posted on a separatist Web site that athletes would not be safe in Moscow.

Madrid officials, responding to members' questions, played down threats from the Basque extremist group ETA, which has carried out bomb attacks near proposed Olympic venues.