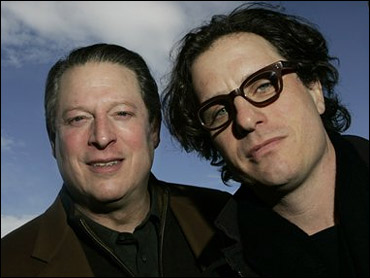 Former Vice President Al Gore is not all that comfortable being a star of the Sundance Film Festival. He's far more concerned that the celebrity watchers hear what he has to say.

The former vice president came to town for the premiere of "An Inconvenient Truth," a documentary chronicling what has become his crusade since losing the 2000 presidential election: Educating the masses that global warming is about to toast our ecology and our way of life.

Gore has been saying it for decades, since a college class in the 1960s convinced him that greenhouse gases from oil, coal and other carbon emissions were trapping the sun's heat in the atmosphere, resulting in a glacial meltdown that could flood much of the planet.

Americans have been hearing it for decades, wavering between belief and skepticism that it all may just be a natural part of Earth's cyclical warming and cooling phases.

And politicians and corporations have been ignoring the issue for decades, to the point that unless drastic measures to reduce greenhouse gases are taken within the next 10 years, the world will reach a point of no return, Gore said.

He sees the situation as "a true planetary emergency."

"If you accept the truth of that, then nothing else really matters that much," Gore said in an interview with The Associated Press. "We have to organize quickly to come up with a coherent and really strong response, and that's what I'm devoting myself to."

"An Inconvenient Truth" takes its title from the notion that consumers, politicians and corporations hooked on energy-inefficient vehicles and emission-heavy power sources may not want to hear the facts, Gore said.

The film centers on the elaborate slideshow presentations Gore conducts around the world for live audiences on the perils of global warming. He presents alarming images of ice-cap meltdowns and graphs linking the rise and fall of atmospheric carbon-dioxide to rising and falling temperatures.

If the pace of pollution continues, Gore's projections for carbon-dioxide levels are off the charts within a few decades.

Among the worst-case consequences: A new ice age in Europe, and massive flooding of regions in India, China and elsewhere that could make refugees of tens of millions of people.

Gore makes his case using copious scientific data and a surprising amount of humor for a politician who found it necessary during campaigns to poke fun at his own stiff image.

"An Inconvenient Truth" also lays out events in Gore's personal life and how they influenced his global-warming mission: A car accident that nearly killed his young son, his sister's death from lung cancer after 30 years as a smoker, his family's legacy as former tobacco farmers, the photo finish of the 2000 election.

Calling himself a "recovering politician," Gore reiterated to a Sundance audience at the film's premiere that he would not run for office again.

"What really attracted us to this presentation is the tone Al strikes," said "An Inconvenient Truth" director Davis Guggenheim. "It's not righteous. It doesn't have a political agenda. It lands right in the middle, and Al just lays out what is this inconvenient truth. And I think that's why the audience is willing to receive it."

Gore said U.S. government and business leaders must follow the lead of other nations that have enacted stricter mileage standards for cars. Utility companies worldwide must adopt cleaner methods of burning fossil fuels and focus on renewable energy sources such as solar and wind power, he said.

The filmmakers brought "An Inconvenient Truth" to Sundance hoping to land a distributor that will put the documentary in theaters.

"I'm thrilled to have a chance to get this message to a broader audience, because doing it retail a few hundred people at a time is pretty exhausting," Gore said. "I'm committed to it and I'm continuing to do it, but if we can get it before a much larger audience more quickly, that serves the larger purpose."