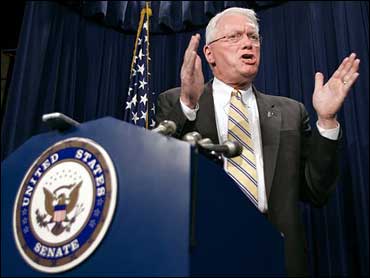 A conservative organization has filed a complaint against Sean "Diddy" Combs, contending the hip-hop mogul violated election law in his 2004 "Vote or Die" campaign by promoting Democrat John Kerry and opposing President Bush.

The National Legal and Policy Center, which filed the complaint, said Tuesday that the Federal Election Commission informed the group in a letter that it would review the complaint.

Ian Stirton, a spokesman for the FEC, said the matter would remain confidential until resolved. Stirton said the FEC receives numerous complaints and it would be up to the commission to decide whether to proceed with an investigation or not.

Combs, through his organization, Citizen Change, traveled to several cities last year urging people to sign up and vote. He declined to endorse either candidate during his push to register new voters.

Aboard his private jet, dubbed Air Force Change, he told The Associated Press at the time that "Kerry isn't smart enough" and should be spending more time in the inner city to "see how a young kid is going to school."

As for the president, he said: "You don't see Bush taking the time to go to BET or MTV. Nobody was talking to this community. I deal with them every day."

In its complaint, the National Legal and Policy Center cited "Vote or Die" rallies sponsored by Citizen Change in which actor Leonardo DiCaprio urged the crowd to back Kerry. The conservative group said public record backs its claim that Combs and Citizen Change undertook a campaign to defeat Mr. Bush and elect the Democrat.

"We feel these are clear-cut violations," said Peter Flaherty, president of the center.

Alexis McGill, executive director of Citizen Change, said the group is proud of what it accomplished and hoped that other organizations would embrace its efforts to bring in new voters.