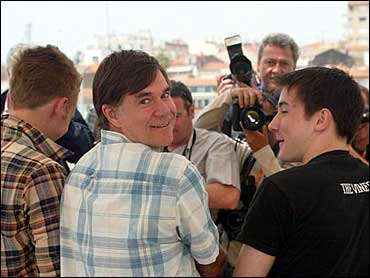 It starts out as a normal day at a typical American high school. Friends gossip in the cafeteria. A young photographer snaps portraits for his portfolio. A shy girl endures taunts from classmates in the locker room.

But at the end of "Elephant," Gus Van Sant's new film at the Cannes Film Festival, two students go on a shooting rampage in the hallways. And many die.

The "Good Will Hunting" director's movie, a fictional account of a school shooting, takes an intimate look at a few hours in the lives of the victims and the killers.

It's a very different take on school violence than Michael Moore offered in "Bowling for Columbine," a hit at Cannes last year. Moore's film searched for the roots of violence in America by looking at everything from school shootings to racism to the National Rifle Association.

Van Sant doesn't offer any reasons for that school violence happens. The message is about how precious teenage lives are: He picked real high school students to act, and he captured their passions, insecurities, awkwardness and beauty.

"We tried to not really specifically explain such a ... horrific event," Van Sant explained. "I was really trying to get out more a poetic impression and sort of allow the audiences' thoughts into that impression."

Van Sant had initially hoped to make a documentary for network television about the 1999 shootings at Columbine High School in suburban Denver. He said executives were worried about showing the violence on television.

HBO Films signed on for a fictional story based on reality. In Cannes, the team is looking for a U.S. distributor to show the movie in theaters before it airs on HBO.

For Van Sant, who has lived in Oregon, the film harks back to the small, lower-budget movies he once made, like "My Own Private Idaho." In Portland, Oregon, Van Sant found a decommissioned school for filming and held an open casting call.

The movie was shot in 20 days. There were no scripted lines, and the students improvised their dialogue, with Van Sant asking them to base their characters on their own lives.

The movie's title is a reference to a 1989 BBC movie, also called "Elephant," about political violence in Northern Ireland. Both films show a difficult problem that's as easy to ignore as an elephant in the living room.

With long tracking shots, the movie shadows several students who are targeted later. One confident, athletic boy flirts with his girlfriend in the hallway. A shy girl shelves books at the library.

It also follows the two boys who eventually carry out the shooting spree. In many ways, they act like ordinary kids. They joke around with one boy's mother as she serves them pancakes. One plays Beethoven's "Fur Elise" on the piano while they hang out.

There are hints of the anger they feel. One of the boys is bullied by a student who throws spitballs at him. The other plays a violent video game. But the director's touch is light: Van Sant isn't blaming their massacre on either bullying or violent video games. Instead, he offers issues to think about.

While the movie is fiction, some details were based on the Columbine massacre, when gunmen Eric Harris and Dylan Klebold killed 13 people and then turned their guns on themselves.

In one scene, one of the young killers walks into the evacuated school cafeteria and pauses to sip from someone's glass - an image recorded by Columbine's surveillance cameras.
Written by Angela Doland